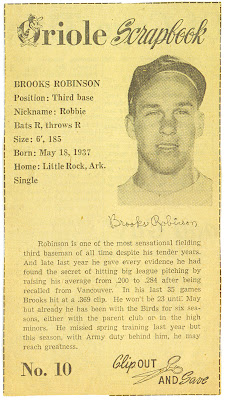 The most significant item in a care package (see March 1 entry) of catalog stuff sent in by collector Al Moore of Maryland is a set of "Oriole Scrapbook" cutouts.
I'm unsure whether the set will actually be included in the 2012 edition of the Standard Catalog of Baseball Cards, but it should at least be presented in this forum for your entertainment and education, and to preserve the data for future hobbyists. Team specialists and player collectors relish this type of discovery.
The reason I'm hesitant to commit to adding the set to the big book is that, with the proliferation of information about previously obscure cards and collectibles available on the internet, I have to be more diligent than ever to preserve the space available in the printed edition of the catalog to those items that most closely fit the definition of "baseball card." Perhaps someday a vintage-only version of the Standard Catalog may be feasible, or perhaps a CD with the full vintage data base.
This set of O’s cutouts was printed during spring training prior to the 1960 season, though in what newspaper and how many per day is unknown. The pictures are printed in black-and-white in a size of about 3-1/2” x 6-3/8”. Each picture has a dotted line to define its borders. Within are a player portrait photo, facsimile autograph, biographical details and a career summary.
Besides a few players I don't recall ever seeing on a card or collectible, such as Bob Reidel and Chuck Stanliand, the set is notable for what are likely the first card/memorabilia pieces for Orioles star Boog Powell and future Los Angeles/California Angels pitching ace Dean Chance. 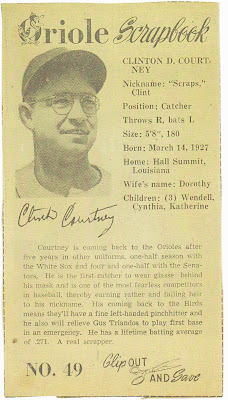