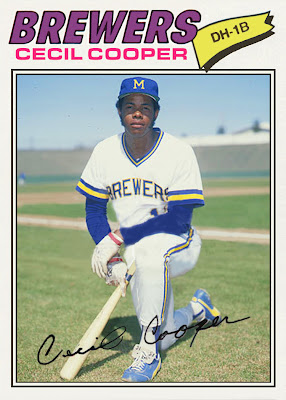 As mentioned in an earlier posting, I'm devoting much of custom card making time this month to filling in some gaps in the body of Milwaukee Brewers cards of the mid- to late-1970s.

My second effort takes the form of a 1977 Topps-style card of Cecil Cooper in Brewers livery.

However, in December, 1976, Cooper was traded from Boston to Milwaukee for Bernie Carbo and George Scott (who had once been a roadblock to Cooper's progress in getting to the Red Sox).

By the time of the trade, however, the presses had probably already been rolling on Topps' 1977 card set, and since the gum company no longer issued cards in series, and updates weren't yet an annual production, there was no 1977 Topps card of Cecil Cooper as a Brewer -- until now.

Topps did make a half-assed attempt to update Coop's card for the O-Pee-Chee set later in the year, but instead of using a new photo, they airbrushed Brewers colors and a logo onto the Red Sox photo.

While he never had the fan following in Milwaukee that Molitor and Yount did, Cooper was an integral part of Harvey's Wallbangers in the early 1980s, and a big reason they made it to the play-offs in 1981 and the World Series in 1982. He provided a quiet veteran leadership presence in the clubhouse, and timely hits on the field.

Cooper's lifetime statistics closely parallel those of Don Mattingly, but like Donny Ballgame, Cooper is unlikely to ever gain admission to the Hall of Fame, largely due to his lack of productivity in post-season play.


While acquiring the photo of Cooper in his early Brewers days, I also found some nice circa 1971 photos of Cooper with the Red Sox. Someday I may work up a 1971-style "rookie" card. 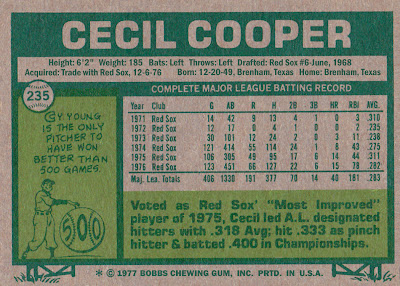