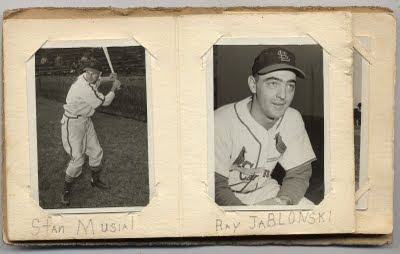 I'd kind of despaired of getting any useful information about the 1953 St. Louis Cardinals player photo book that was featured in our Oct. 31 posting. I'll wait here while you go back through the archives and refresh yourselves on the original post.
Today, however, I received an e-mail from a former Sportsman's Park/Busch Stadium concessions employee with first-hand knowledge of this great memorabilia item. You might know my correspondent, it was George Michael, former "Sports Machine" broadcaster.
He wrote, "I was selling scorecards in 1953, saving my money for school. For weeks I had admired this little book with these great glossy photos. It was for sale for $5.00, which was a fortune to me.
"Anyway I finally bought the book and got 22 of the original photos because some of the guys in the book at the start of the year had been traded. Because there was only 22 photos, I was thrilled to get a discount." He continues, "This book is one of my most cherished items because I really could not afford it, but thought it was the coolest thing I ever saw.
"I told my mom I bought it, and instead of getting mad at me, she told me to get everyone to sign it and she would be impressed." George recalls, "I went to work on the players and got most of them to sign it. Stan Musial signed it twice because the pen didn't write well on the photo. Even today these autographs rate a mint '10.'"
George listed 16 players who signatures he obtained in the photo book. He doesn't, however, have Rip Repulski or Harvey Haddix. "I do not know how I missed them because both were very good guys."
Another autograph missing from George's book is manager Eddie Stanky. George recalls, "He was a 100% jerk! Three times I waited for him until late at night after games to sign and he would always tell me to get lost. I showed him the whole thing one night and said I would be very grateful if he would sign it for me. He told me to go home and never bother him again."
George calls Stanky, "the worst Cardinal I ever dealt with." He continued, "Solly Hemus asked me if I wanted him to get Stanky to sign it and I told him 'No, tha nks.' I wanted to remember Mr. Stanky forever!"
I guess that's why Stanky's nickname was "The Brat."
George has offered his assistance identifying any of the player photos that are still in question.
This welcome first-hand information dispels my notion that because the photos do not have printed identification the photo book was likely not a souvenir stand type of item.
As George points out, $5 was a fortune in 1953. The Cards' yearbook was only 50 cents. Five bucks would buy a kid more than four boxes of baseball cards back then. I imagine that steep price explains the scarcity of the photo book today.
It's also interesting to learn that when players left the team, their photos were excised from the book. That would make a complete 28-player example all that much scarcer.
UPDATE: I've just learned that George Michael passed away on Dec. 24. That's a real shame. I'm guessing he would have been a regular contributor to this blog and we'd have all learned a lot and been entertaind.
Posted by Bob Lemke at 9:41 AM