Back in the early 1980s I thought I'd combine my interests in minor league baseball and vintage baseball cards by assembling a collection of the Obak cigarette cards that were distributed on the West Coast in 1909, 1910 and 1911.I didn't realize it then, but those cards are so much rarer than most of the contemporary T206 cards from "Back East" that putting together complete sets of the Obak could take decades to accomplish -- and that's if a guy had more money than God to buy the cards when they became available.At about the time I started my Obak collection I also started researching the players who appeared in the sets. Over the course of several long Wisconsin winters I pored over microfilms of The Sporting News and The Sporting Life from the period several years before to several years after the Obak cards circulated, making prodigious notes on 3x5 file cards for each player in the set.I gave up trying to collect the T212s (that's the catalog number Jefferson Burdick assigned the three sets in the pioneering American Card Catalog in 1939), long ago, and have since sold off all my Obaks, one-by-one, first on eBay, then on the Net 54 baseball card forum. As I was selling each card, I included interesting tidbits about each player from my notes. The bidders seemed to like learning a little bit about these guys on the cards, so I thought I'd now begin sharing their stories here. Please excuse the lo-res nature of the card pictures; they were scanned for my auctions many years ago.
Two of the emptiest note cards in my file box of Obak cigarette card subjects are those of Anson Mott and Bobby James. Other than their names, their positions and the teams on which they appeared on these baseball cards, there is nothing of note to report.

Digging into the SABR Minor League Database helps flesh out their baseball careers, which, while undistinguished, were still such as to earn them each two baseball card appearances. 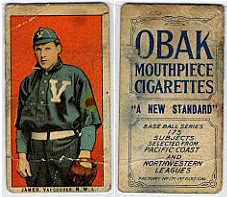 Bobby James was born Robert E. James in Seattle, though the date in not found in baseball records. Naturally enough he began playing pro ball for the Seattle Siwashes in 1904, as a first baseman. He started the 1905 season with Seattle, but after hitting just .225, he was sent down to Bellingham.

His one baseball job off the West Coast came in 1906 with Indianapolis, who tried him at third base. He batted a modest .244 and was returned to the Northwest League, where he spent 1907-1909 with the Spokane Indians as their second sacker.

The 1910-1912 seasons were spent with the Vancouver Beavers, also in the Northwest League. He played secodn base in 1910, third in 1911 and was tried out on the mound in 1912. Despite a remarkable record of 29 wins and only seven losses, he returned to Seattle to end his pro career in 1913-1914, again at third base. The fact that he appeared in only 69 games in 1913 suggests that an injury to his throwing arm may have forced him off the mound after the 1912 season.

The date and place of James' death are not found in baseball records. 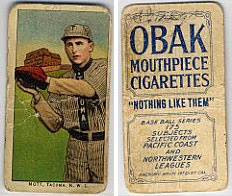 Anson Mott appeared in both the 1909 and 1910 Obak sets; in the former he was with Vancouver, in the latter he is pictured as a Tacoma Tiger.

Over a seven-year minor league career, Mott played at first, second and third base, and in the outfield. He was born in 1882, but when and where are unrecorded. He began his pro career at second base with Dallas and Corsicana of the Class C Texas League in 1904. He split 1905 with Oskaloosa in the grandly named Iowa League of Professional Baseball, a Class D circuit, and Colorado Springs/Pueblo in the Western League.

His last engagement in professional baseball appears to have been with Tacoma in 1910, at the age of 28.