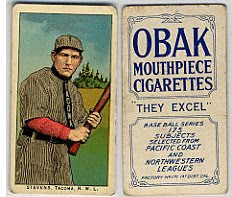 The evergreens in the background of Stevens' 1910 Obak card (it was his only year in the cigarette company's three years of issues) just scream Northwestern League. It is those backdrops that give the Obaks a unique look that attracts many collectors.

Now we just have to figure out who the guy on the card is. My file card indicates that it is William B. Stevens. The SABR Minor League Database thinks it is Walter B. Stevens. Could both be the same guy? Their records in the SABR database don't overlap, they were both outfielders and there is no biographical information about either Bill or Wally.

The player identified as Walter B. Stevens debuted with Duluth (Minn.) of the Northern Copper Country League in 1906, then took a big step from that Class C circuit to Milwaukee in 1907, My research failed to turn up the Duluth connection, but does note that Stevens was traded from the Brewers to Spokane of the Northwestern League for 1908. During the 1909 season he went from Spokane to Tacoma, for whom he also played in 1910. That's where the SABR data loses track of Walter Stevens and picks up the record of William Stevens.

Both SABR and I agree that Stevens (whether William or Walter) began the 1911 season with Helena in the Union Association (Class D). When the Boise Irrigators released Stevens, he went to Boise, from whom he was purchased by Rock Island of the Illinois-Indiana-Iowa League.

The 1912 season found Stevens back in the UA, with Ogden. His baseball trail ends there.