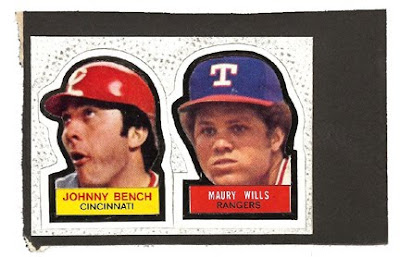 A recent reader inquiry about the issue that is listed in the Standard Catalog of Baseball Cards as "1980 Topps Stickers Prototypes" got me to thinking and wondering. The set has been listed for about 4-5 years, but looking back on it today, I am at a loss to remember why it is listed among the Topps issues, and why it was attributed to 1980.

Phil, our correspondent, wrote to inquire whether we had any information about the issue that has not been included in the catalog, and to point out that the player photos on the Bench-Wills sticker that he owns were actually taken from 1977-dated issues of Sports Illustrated magazin

Phil's sticker, like all other reported examples, is unique and is stuck to a piece of cardboard. The actual sticker measures 3-1/2" x 2-1/2". On its face there is nothing to suggest any connection between the sticker and Topps. Yet, I'm quite sure that I would not have listed it as a Topps issue if there hadn't been some sort of proof provided when the issue was first cataloged. Though it hasn't been that many years ago, today I have no recollection of the circumstances surrounding the stickers' discovery, such as who, where, etc. (It's hell to get old!)

If this was, indeed, a Topps prototype, it appears to have been produced to test techniques for mass-producing die-cut peel-off stickers, something that Topps had never done to that point.

I'm going to rely on my original judgment and keep the stickers in the Topps section, at least for the 2011 edition of the "big book," but there are going to be some changes made to the introductory paragraph. In keeping with some other Topps prototype listings, I'm going to eliminate pricing for this set in the new edition. Each sticker pair seems to exist in but a single example, makig any pricing we may provide problematical.

Here is the checklist of known examples of this issue: