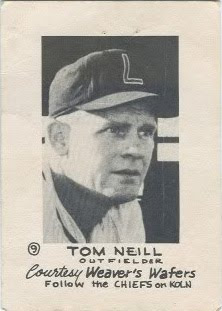 Many of the set listings in the Standard Catalog of Baseball Cards started with only one or two cards and over the years grew as additions to the checklist were confirmed. Whether or not that will be the case with this early 1950s Lincoln Chiefs minor league set remains to be seen, but thanks to dedicated Nebraska 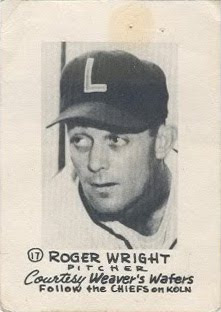 baseball collector/historian Dan Bretta, we'll at least get a start when this set is listed in the 2011 SCBC.
So far, these are the only two cards known from this set. Because both players were on the Chiefs in both 1953 and 1954, it is impossible to pinpoint the year of issue.
Dan leans towards 1953, since that was the year that Lincoln changed affiliations and nicknames in the Class A Western League, becoming a farm club of the Milwaukee Braves. Seems logical, so unless or until another player card surfaces to contradict that notion, we'll go with it.
The cards are printed in black-and-white on think, blank-backed card stock, about 3-1/4" x 4-1/2". They carry on front the advertising of Weaver's Wafers, which was a local potato chip company that went out of business only in recent years. The cards also have an ad for radio station KOLN, which broadcast the Chiefs' games.
The manner of distribution for the cards is unknown, but again, their owner has a theory. The staple holes at the top of each card suggests they may have been stapled directly onto the top of the bag of potato chips.
Neill was one of seven 1953 Chiefs who had formerly played in the majors (the others were Clarence Beers, Norm Brown, Jack Daniels, Fred Hancock, Walt Linden, Red McQuillen); one other Chief (Fred Waters) would in the future.
With only two players known from this set, and each card being unique, the catalog listing will carry a "Value undetermined" notation rather than pricing.