Many of my regular readers know that for the last 6+ years I have been engaged in creating custom baseball and football cards -- cards that never were. I started the series by creating some cards in th 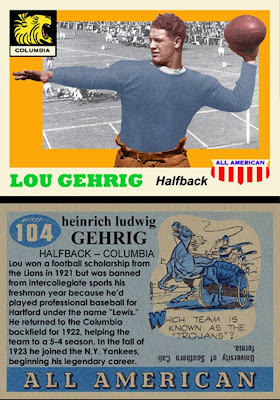 e format of one of my childhood favorites, the 1955 Topps All-American Football set.

One of the earliest cards in what I call my All-American Second Series is the Lou Gehrig card shown here. Early on in my research I was surprised to discover that a fair number of baseball's stars 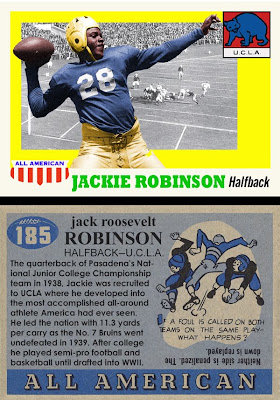 over the years had also played some college football.

As I read up on their gridiron days, it became apparent that several of these two-sport collegiate stars could have easily made the the grade in professional football. Most of them, however, seem to have eschewed pro football because there was little money to be made in the game's early decades.

I was able to acquire the football photos I used on my Jackie Robinson and Lou Gehrig cards from books I found in the public library. Gehrig's photo was in a book about Ivy League football, while Robinson's was in one of the several biographies about him. Each picture was in black-and-white, so I had to colorize them in my Photoshop Elements graphics program for use on the cards.

Besides these Hall of Famers, I have done 1955 AA-style cards of Christy Mathewson (Bucknell), Kirk Gibson and Steve Garvey (Michigan State) and Bo Jackson (Auburn). You can find images of those cards in my Photobucket albums at www.tinyurl.com/customcards.

I still have some baseball players on my "most wanted" list to be used in creation of All-American cards; I'd love to find photos of these guys in their college football uniforms: Bill "Moose" Skowron (Purdue), Ted Kluszewski (Indiana) and Frank Thomas (Auburn).