Without a doubt, the custom card with which I was the least pleased upon my first effort was my 1955 All-American style Johnny Unitas. 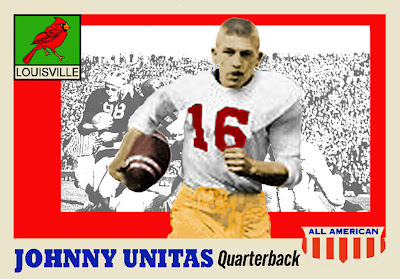 Obviously, no updating to that classic college football card set would have been complete without a Johnny U card, but my initial effort really fell short of the mark.


When I originally searched for a contemporary photo of Unitas during his college days I found only a few rather poor images. They were all too small or too fuzzy, but I chose the best of the bunch and did what I could to colorize it and sharpen it up for use on my card.

As if the photo wasn't bad enough, I somehow managed to "over expose" the black-and-white background action photo. washing out much of the detail and giving it a ghastly ghostly appearance that was not at all in keeping either with the original Topps cards or with my own latter-day reconstructions.

I even muffed the choice of school logo, picking the most insipid cardinal when I really should have gone with a more feisty bird. Like Topps did in 1955, I like to avoid using official school logos on my cards; it gives them more of my own personal touch. 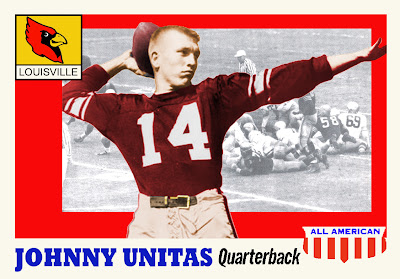 I've known for a long time that I would someday replace my original Unitas effort, but had pretty much despaired of finding a better photo. Imagine my surprise then, the other day when I image-googled "Unitas Louisville" to find that the football Hall of Fame had acquired a much better college image. The photo on their site had the posed action shot outlined in white, indicating it was probably used as a newspaper photo some time in the past.

With a couple of hours of work with Photoshop, I was able to clean up and colorize the picture.


I dropped a new background photo into my existing Unitas card "frame," replaced the cardinal logo and had my new and improved Johnny Unitas All-Amer 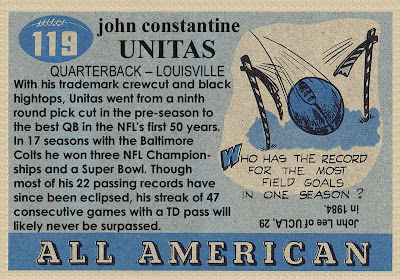 ican card. It is a great improvement to my set.

As with the other cards that I have replaced, I was able to use my original card back, so the new card was done in a releatively short time.


Now, if I could just find a really nice Jim Brown Syracuse photo . . .