My Only (Intentional) '55 All-American Variation 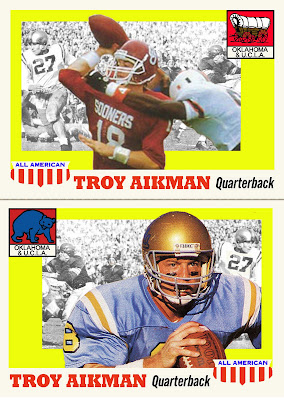 Among the more than 125 baseball and football cards that I have created since 2003, the only intentional variations have been this pair of Troy Aikmans. (I have however, on occasion, been forced to make "corrected" versions of some of my cards to fix stupid mistakes, typos, etc., and I don't count the cards on which I have replaced subpar photos as variations, since the old versions have been destroyed except for my two personal file copies.)
Until I started researching 1980s college football for my various custom card creations, I was unaware that Aikman had played for both the Sooners and the Bruins.
I like Aikman as a TV football analyst. He's knowledgeable, understated and knows his limitations (i.e., he doesn't try to be funny). I didn't like him so well when he and the Cowboys were regulary kicking Packer keister back in the day.
I decided to create two varieties of Aikman All-American cards when I was poring over Sports Illustrated back issues for card-worthy photos and found pictures of him with both Oklahoma and U.C.L.A. While the original Topps 1955 All-Americans don't include any front variations (there are scarce wrong-back variations of Gaynell 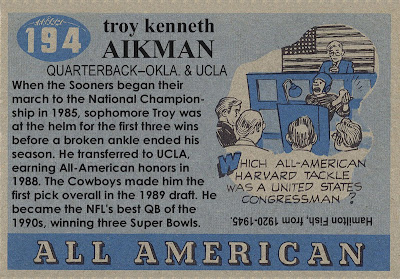 Tinsley and Whizzer White), there was a precedent for at least acknowledging two schools on card #99 Don Whitmire, who is listed with both Alabama and Navy.
Besides changing the color phots on my two Aikmans, notice in the background that while I used the same black-and-white photo, I flopped one of them so that #27 is shown running to the left on the Oklahoma version, and to the right on the U.C.L.A. card.
One nice thing about the variations is that I could use the same back for both cards.