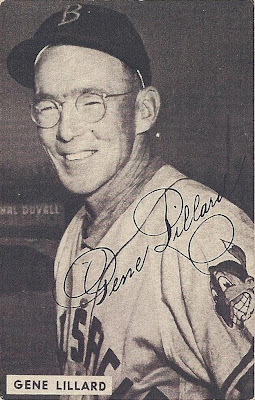 In our Oct. 17 posting about the Globe Printing Co. and its body of work in the field of minor league baseball cards in the early 1950s, we mentioned that the exitence of an album for a set of 1952 Bakersfield Indians cards had been reported, but that no cards from that set had yet been confirmed.

We're now able to confirm the first card from that set. As "predicted," the card is of manager Gene Lillard. The report comes from veteran Maryland collector Al Moore, who has promised to provide us with some more fodder for our columns as he digs through his collection of heretofore uncataloged cards.

Al's example of the Globe Lillard card appears to have been authentically autographed, in fountain pen, no less.

In 1952, Lillard, who had played major league ball with the Cubs as a shortstop and third baseman in 1936, and as a pitcher in 1939, also pitching for the Cardinals in 1940, was the playing manager for the Class C Bakersfield Indians of the California League in 1952.

With Bakersfield that year, at the age of 38, he pitched in 13 games, and filled in as a second baseman, third baseman and catcher, batting .292.

Like many of our correspondents, Al would like to expand his holdings of Globe Co. minor league cards; his particular goal is to acquire one card from each team set.
Posted by Bob Lemke at 1:03 PM