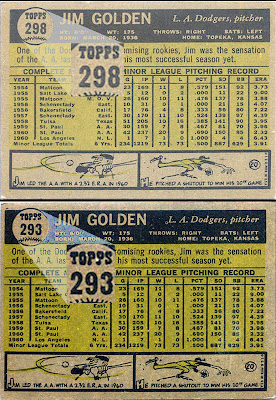 As mentioned last time, we're going to take a look at a little-known error/variation card from the 1961 Topps baseball set.
The usually encountered version of Dodger pitcher Jim Golden's card in that set has on back the card number 298.
One of the hobby's veteran vintage card collectors, John Rumierz, is credited with discovering a rare error/variation of that card on which the card number appears to be 293. John says he discovered three examples of this error more than 30 years ago. He has retained two, and one was traded to Larry Fritsch in some long-forgotten transaction.
I remember Larry showing me this error/variation more than 25 years ago. As far as I know, he never found another example among the dozens or hundreds of 1961 Jim Golden cards that passed through is inventory.
While I can't recall definitely, I seem to remember that at some point in the distant past, we ran an article on this anamoly in SCD, seeking reader input as to the existence of further specimens. None were forthcoming. It's possible, though not likely, that Rumierz' three cards are the only ones that have ever been identified.
His reason for reopening an inquiry about this card was his desire to have it aut 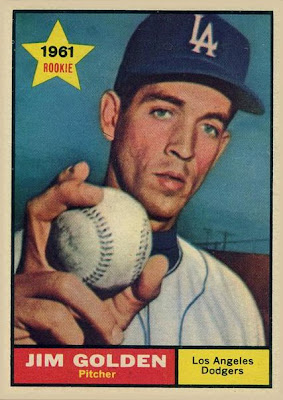 henticated by PSA. That grading company is loathe to authenticate/grade any card that is not listed in one of the major baseball card catalogs, and to date, the Golden has remained uncataloged.
I don't know if that will change, because the #293 Golden is a printing mistake, rather than a true variation. At some point in the printing process, perhaps right at the stage at which the back printing plate was being made, a stray foreign object appears to have obscured part of the "8" digit in the card number, giving it the appearance of a "3".
It takes a sharp eye and probably a lot of experience poring over 1961 Topps card numbers to discern the difference in the "3" on the back of the Golden error and the typical digit found on Topps cards that year. For illustrative purposes, I've digitally enhanced the numerals from a normal card and from the error Golden.
On the typical 3, the ends of the top and bottom arms at left are truncated flatly horizontal. On the broken 8 from the Golden card, the ends of those arms are angled, and the bottom arm appears to have an "ear" at the left tip. Note also that the center bar of the regular 3 extends to the left almost as far as the right end of the top and bottom arms. On the error Golden cards, the center bar is just a nub. 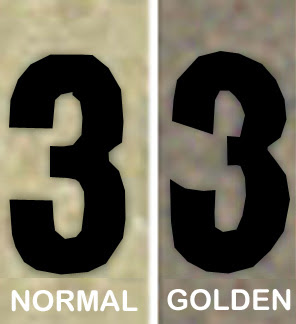 Frankly, I'm not inclined to list this error/variation in the Standard Catalog of Baseball Cards. In recent years, due to the information explosion made possible by the internet, the ease of scanning images, and the creation of large and active on-line sales and trading sites, the number of reports of vintage cards exhibiting visual variations has grown exponentially.
The vast, vast majority of those cards are the result of unintended mishaps in the printing process, rather than variations that were created by intentional changes made in the design, paste-up or printing stages.
While there are avid collectors of every cards that has a gap in a black photo frame, stray blobs of ink or areas of missing color, to attempt to legitimize all of them by cataloging them seems impossible. Many of these printing flaws show up in various stages on different cards and could require multiple listings on a checklist to describe each. Again, with the revolution in computer-assisted publishing bringing costs down, a catalog of even the most minute error cards is not out of the realm of technical possibility, although given the limited number of collectors that care about such things, such a catalog would never be commercially feasible as an ink-on-paper product.
It can certainly be argued that some of the most valuable post-war baseball cards are printing errors not unlike the #293 Golden. These include the 1957 Gene Bakep, the 1958 Pancho Herrer and the 1990 no-name Frank Thomas. These cards are from several hundred to many thousands of dollars. It is largely because these cards have attained such demand and value in the hobby market that they are included in the SCBC. If any of these had not been discovered until recently, it's doubtful they would have been cataloged. In fact, recent research by dedicated error collectors has shown that the same printing mishap that created the no-name Thomas card also affected a dozen or so other cards on that press sheet, though much less visually arresting and none on an iconic rookie card of a future Hall of Famer.
I'd be interested to see your comments about the #293 Jim Golden, and whether your own collection harbors an example. If a sufficient market for the card was to develop, the issue of its inclusion in the Standard Catalog would be revisited. But that's kind of a Catch-22. The major grading companies will not sanctify the card unless it is listed, and many collectors will not pursue it unless the grading companies will slab it.
Posted by Bob Lemke at 11:48 AM