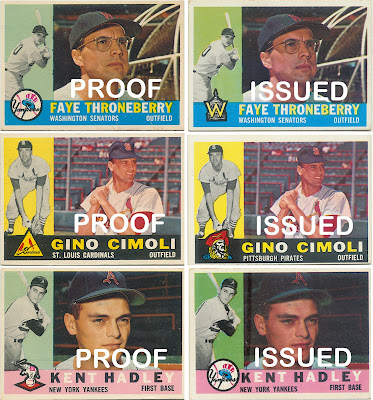 I no longer have a shelf full of back editions of the Standard Catalog of Baseball Cards, so I don't know how long the book has carried the listings for the 1960 Topps proofs, nor how long that listing has incorrectly referenced one of the cards.
Recent editions of the catalog show three 1960 Topps proofs, one of which is listed as "(Existence not confirmed.)". The proofs differ from the regularly issued versions of the same players' cards principally in the team logos that appear in the lower-left corners on front.
The proof card that the Standard Catalog has promulgated misinformation lo these many years is that of Faye Throneberry. The books lists under 1960 Topps Proofs card #436 Marv Throneberry, and lists its existence as unconfirmed.
Thanks to a report by veteran vintage card specialist John Rumierz we now have the real story. John obtained examples of each of the three proofs many years ago from former Topps employee Bill Haber. Actually, John calls these cards "team variations," and he has a legitimate point. Most of what the hobby identifies as proof cards are unfinished in some way, usually blank-backed. The three First Series 1960 Topps rarities are fully printed both front and back.
Let's examine each.
Card number #9, Faye Throneberry, in the commonly encountered issued version, pictures him in a Senators uniform, lists his team on front and back as the Washington Senators and has a Senators logo on front. The proof/variation version differs only in that the team logo at bottom-left is that of the N.Y. Yankees.
Unlike the players on the other two proofs/variations, Faye Throneberry was not involved in a pre-1960 season trade that necessitated reworking his Topps card. Throneberry, in fact, never played for the Yankees. He was with the Senators from mid-1957 through the 1960 season.
It is likely the appearance of a Yankees logo on the front of the proof/variation card is the result of somebody at Topps mixing Faye up with his brother, Marv. I can't fault them for that, since we did the same thing in the SCBC. Marv Throneberry was involved in the multi-played deal on Dec. 11, 1959, that sent Roger Maris, Kent Hadley and Joe DeMaestri from the K.C. A's to the N.Y. Yankess for Marv Throneberry, Don Larsen, Hank Bauer and Norm Siebern. I'm still unsure exactly how that factored into Topps putting a Yankees logo on the first version of Faye Throneberry's card, but that's what happened.
Another of the players involved in that trade also has 1960 team variation cards. Kent Hadley's card, #102, was initially printed with his photos in A's uniform, his team listed as New York Yankees and an A's logo. The only change made on the "regular" version of the card was the substitution of a Yankees logo on front. Hadley's proof/variation is the only one of the trio that has been publically sold in recent memory. In Nov., 1999, a NM example sold for $13,500.
The third card in this group was the most extensively changed. As initially printed, card #58 had Gino Cimoli picture 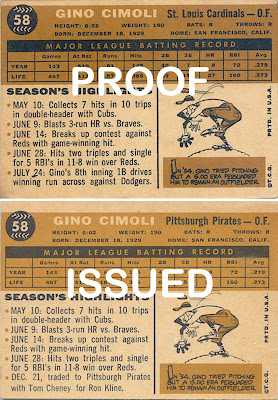 d as a St. Louis Cardinal, listed his team that way on both front and back, and had a Cardinals logo on front.
Cimoli was traded to the Pittsburgh Pirates on Dec. 21, 1959, prompting Topps to halt the presses and rework Cimoli's card. While Cimoli is still pictured with the Cardinals on the regularly issued card, his team designation has been changed on front and back to "Pittsburgh Pirates," the logo on front was changed to the Pirates, and the trade was noted among the bullet points on the back.
You know, after working through all this, I'm not sure that the catalog listing for these three cards as "Proofs" shouldn't be deleted and the three cards added to the main checklist as variations. What do you think?
The number of extant specimens of the proof cards is unknown. My best guess would be that there are fewer than five of each, it could be as few as two or three.
In his recent correspondence, John raised the subject of another rare 1960s "variation" that is worthy of presentation. We'll look at that next time out.
Posted by Bob Lemke at 9:47 AM