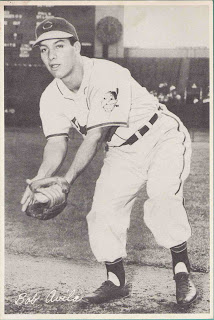 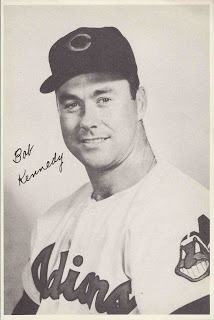 Team-specialist collectors 60 years later are enjoying the fruits of the Tribe's popularity with its fans, as all manner of team-issued and sponsored player collectibles were forthcoming in that era.

That's not to say, though, that the embarassment of riches in the form of player photo collectibles is not without its challenges.

The fact that so many of these collectible series are in similar formats and often share the same player images has the potential to confound today's collector who is faced with a stray photo or a small group. 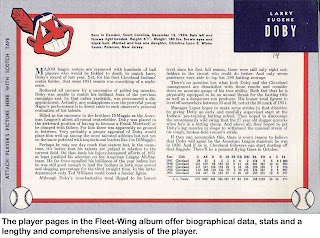 That's probably the reason that a 1952 issue by a Northern Ohio gas station chain has thus far escaped the notice of catalogers. Who knows how many of these Indians premium pictures reside in collections today, misidentified as team-issued picture pack photos.

In reality, there is not much to distinguish the 1952 Fleet-Wing player photos from contemporary picture pack fare. The pictures are a mix of portraits and posed action shots, bordered in white, bearing either a black or white facsimile autograph. According to Indians specialist Chuck Lobenthal, who provided the data and images for this listing, the pictures from the gas station promotion are the same as those found on the 1952 Num Num potato chips, though the Fleet-Wings are larger, at 6" x 9," and have the facsimile signatures. 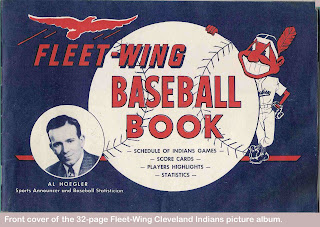 1952 "Fine Pen picture pack issue is their size (the photo pack pictures are 1/2" wider, at 6-1/2"). and the heavier paper stock on which the Fleet-Wings are printed.

You can see the potential for confusion.

The album that was issued to house the Fleet-Wing pictures is actually somewhat smaller, at approximately 5-7/8" x 8-3/4". The horizontal format album has 32 pages. The inside front cover has the Indians home and away schedules. This is followed by five pages of information about the team and Fleet-Wing. There are then eight pages of player biographies, 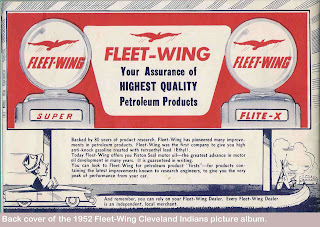 with instructions to scotch tape the pictures to the top of the page, presumably so that the photo can be lifted to read that player's comprehensive stats and analysis.

At the center of the album are eight pages of scorecards, then another eight pages for player pictures.

Chuck also has an 8-1/2" x 5-1/2" sheet that appears to have been a point-of-purchase window or counter display that explains how to obtain the album and pictures. One picture was given for each $1 purchase made at the gas station.

To assist collectors in correctly identifying 1952 Fleet-Wing premiums, we'll checklist them not only by player name, but also include the pose and the color of the facsimile signature. 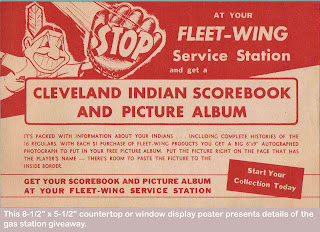 Conventional hobby wisdom would dictate that a gas station premium would carry a significantly higher market value than a team-issued or picture pack photo. However, the ease with which the Fleet-Wing pictures could be misidentified may mitigate against their achieving that sort of advantage.