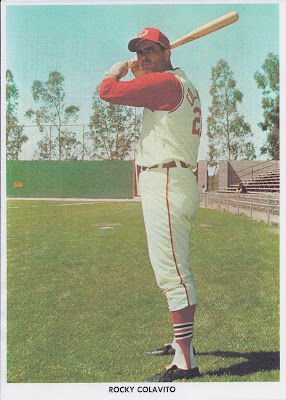 The dean of vintage baseball card and memorabilia collectors in Maine is indisputably Bob Thing. He has been contributing bits and pieces for the Standard Catalog of Baseball Cards as long as there has been a Standard Catalog of Baseball Cards.
Responding to our recent spate of Cleveland Indians collectibles reports, Bob sent a care package of information regarding a number of Indians picture packs and related items from the 1950s and 1960s. His reports are especially useful in cataloging because they are "first-hand." That is, the checklists that he provided are derived from sets that he personally ordered from the team when they were issued, and which have remained in his hands continuously.
One of the hazards of checklisting team-issued photo packs 40 or 50 or 60 years after their issue, is the possibility that photos from different years were intermingled as the sets went from the original purchaser through several later owners to today. Another complicating factor is the widespread hobby belief that some teams issued different versions of their photo packs as the season progressed to reflect roster changes as players were called up or traded. The picture pack that was sold during spring training might not have corresponded identically to that sold at World Series time.
While Bob was able to provide checklists for each Cleveland Indians picture pack from 1956-1962, and while those lists will be incorporated into the SCBC data base, that's not the focus of this presentation.
What I want to share with you here is the 1967 Cleveland Indians "Yearbook." I put the title in quotation marks because the '67 Indian yearbook wasn't what the hobby generally thinks of in regards to that term . . . an 8-1/2" x 11" stapled publication with pages of player photos and data and team information.
Rather, the 1967 Cleveland Indians Yearbook was a 7" x 9" folder that held, loose-leaf style, a set of player photos and a few other specialty pictures. Each picture was printed on heavy paper stock, about 6-3/16" x 8-11/16". Most of the player pictures were color poses, though a few were in black and white. Fronts have a white border with the player name at bottom. Backs are in black-and-white with an informal player photo, complete stats, biographical details and career highlights.
The sample back that Bob sent shows Rocky Colavito holding a hunting rifle with a taxidermy moose head in the background. That photo is so politically incorrect by today's "standards" that if it appeared today PETA would picket the Indians' ballpark and Rocky would be sent away for sensitivity training.
While we normally don't include yearbooks in the Standard Catalog, I think this merits an exception because of its loose-leaf nature. The player photos could easily become seperated from the folder and collectors might logically look for them in the "big book." Also, the nature of the loose photos makes it easy for them to be sold individually. Thus they are more like baseball cards than a yearbook.
Here's the checklist; black-and-white pictures are noted.
(1) Bob Allen
(2) Max Alvis
(3) Joe Azcue
(4) Steve Bailey
(5) Basebelles Night at the Stadium (b/w)
(6) Gary Bell
7) Richard Booker
(8) Larry Brown
(9) Rocky Colavito
(10) George Culver (b/w)
(11) Vic Davalillo
(12) Vern Fuller
(13) Gus Gil
(14) Pedro Gonzalez
(15) Steve Hargan
(16) Chuck Hinton
(17) Indians Field Leaders (George
Strickland, Del Rice, Mgr. Joe Altobelli,
Pat Mullin, Clay Bryant)
(18) Jack Kralick
(19) Lee Maye
(20) Sam McDowell
(21) John O'Donoghue
(22) Dick Radatz
(23) Vincente Romo (b/w)
(24) Chico Salmon
(25) Sonny Siebert
(26) Duke Sims
(27) Willie Smith (b/w)
(28) Luis Tiant
(29) Leon Wagner
(30) Wahoo Club (Al Rosen, Larry Brown)
(31) Fred Whitfield 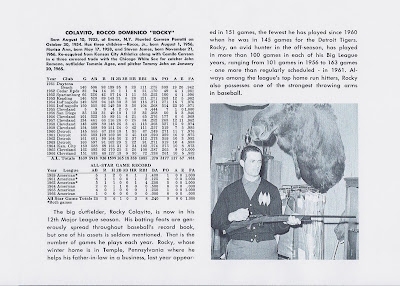