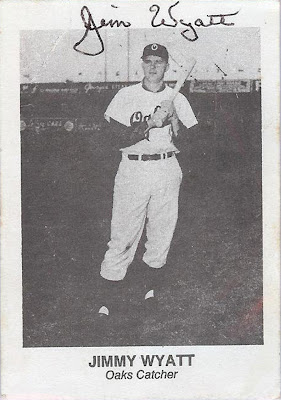 A reader recently brought to my attention an interesting baseball card because he had been unable to find it listed in the Standard Catalog of Baseball Cards, or anywhere else.
The card purports to be a 1956 Remar Bread regional of Oakland Oaks catcher Jimmy Wyatt, and is autographed "Jim Wyatt" at top on front.
Nothing unusual at first glance, except that conventional hobby wisdom is that Remar stopped issuing baseball cards in 1950. The Bay Area bakery had previously issued team sets of Pacific Coast League Oakland Oaks in 1946, 1947, 1949 and 1950, and team-photo cards in 1945 and 1948.
Collector Jeff Legendre had initially sent scans of his mystery card and later agreed to send me the card itself for examination.
I'm stumped.
While visually similar to the Remar Oaks player cards, there are significant differences with his Wyatt card. The 1946-1950 Remar cards measure 2" x 3", printed on thin cardboard in black-and-white on front and in red (1946) or blue (1947, 1949, 1950) on back.
Jeff's card is 2-5/16" x 3-5/16" and is black-and-white both front and back.
The back of the Wyatt card follows closely the format of the 1950 Remar set. There are player stats at top, and ads at the bottom for Sunbeam Bread and for radio and television stations that broadcast Oaks games.
On the back of the card in question, the lower portion appears to have been photographically copied from a genuine 1950 Remar, with subsequent loss of some fine details, while the stats at top vary subtly in typography and punctuation from a 1950 card, such as using a "0" instead of a long dash. That's not to say that if Remar had decided in 1956 to resurrect its baseball card program that such minor differences would not have resulted.
But it is unlikely that Remar would have issued Oaks cards in 1956, because Oakland did not field a team in the Pacific Coast League -- or anywhere else in Organized Baseball -- in 1956. In fact, professional baseball did not return to Oakland until 1968, the American League A's came to town.
And Jimmy Wyatt?
More than cursory searching on the internet failed to turn up anybody by that name who was associated with the 1955 Oaks. Neither was there a Jimmy/Jim/James Wyatt of that age playing anywhere else in the minors that season.
Yet, there on the front of the card is a photo -- visually consistent with those found on other years of Remar cards -- of a player identified as Jimmy Wyatt. It appears as if the printing plate for the cardwas not created from a pristine copy of this photo, however, as what looks like a major crease in the upper-left corner, and some black spots and streaks to the right of the player's head were likely present on the original photo.
While all of this could have been determined from the scans that Jeff sent, I wanted to examine the card in-hand to look at the paper and printing. Doing so compounds the mystery. The thin cardboard stock on which the card was printed displays exactly the type of aging that one would expect in a 55-year-old baseball card. The overall white borders and background have mellowed to a cream tone, with slightly darker edges. Those edges, and the corners exhibit the kind of light handling that would also be consistent with a mid-1950s card. 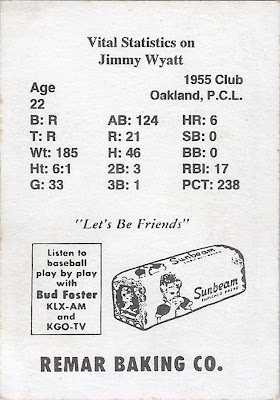 Examination of the printing under magnification shows that the Wyatt card was printed by offset technology current half a century ago. It is clearly not something that was computer-generated in the recent past.
So, what do we have here? Darned if I know. My best guess is that the person identified on the card as Jimmy Wyatt had some sort of connection to the Oaks at one time, though clearly not as a player. (In fact, the stats on back, purporting to be from the 1955 PCL season, don't add up. If a player has 46 hits in 124 at-bats, his batting average is .371, not .238 as shown on the card.)
I'd guess this card was a fantasy or custom card created by Wyatt or a friend or family member as a tribute to whatever his connection had been with the team. If so, the creator has my admiration. As a custom card maker myself, I can appreciate how difficult it would have been to create such a card in pre-computer days. This card was likely printed more than 25 years ago, and I could be persuaded that it was indeed a late-1950s product.
If you can shed any light on this mystery card, or this particular Jimmy Wyatt, please post a comment or drop me an email at scbcguy@yahoo.com.
Posted by Bob Lemke at 1:24 PM