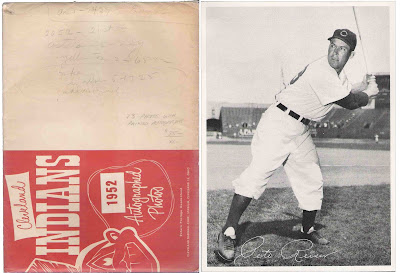 I know it seems like we've been seeing more Indians than Custer, but I really don't mind. I wish we had as many dedicated vintage team specialists for the other teams as we do for Cleveland. These reports expertly expand the scope of our coverage of team-issued collectibles that we can share with the rest of the hobby in the pages of the Standard Catalog of Baseball Cards, and possibly some day, in other, even more comprehensive, venues.
The most recent addition to the body of knowledge again comes from Chuck Lobenthal, who presents the straight scoop on two different 1952 Cleveland Indians picture packs. Why the team chose to produce two distinctly different photo packs in some years during the 1950s is a mystery to me. And, because the pictures from each version are sometimes the same, or nearly so, this has created collector confusion over the years. And that's aside from the confusion that results when pictures from packs issued in different years are found accumulated together.
The two 1952 photo packs are slightly different in format, and Chuck has labeled them, in true hobby tradition, as Fine Pen and Wide Pen, because the principal difference between the two sets of photos is the thickness of the facsimile autographs.
The first set, which Chuck calls the Fine Pen set was issued in a red-and-white envelope labeled Cleveland Indians 1952 Autographed Photos. These pictures are 6-1/2" x 9," blank-backed. The checklist provided by Chuck is:
(1) Bob Avila
(2) Ray Boone
(3) Lou Brissie
(4) Bob Chakales
(5) Merrill (2 L's in first name) Combs
(6) Larry Doby
(7) Luke Easter
(8) Bob Feller
(9) Jim Fridley
(10) Mike Garcia
(11) Steve Gromek
(12) Mickey Harris
(13) Jim Hegan
(14) Bob Kennedy
(15) Bob Lemon
(16) Al Lopez
(17) Dale Mitchell
(18) Pete Reiser
(19) Al "Flip" Rosen
(20) Dick Rozek
(21) Harry Simpson
(22) George Strinweiss
(23) Birdie Tebbetts (2 t's in last name) 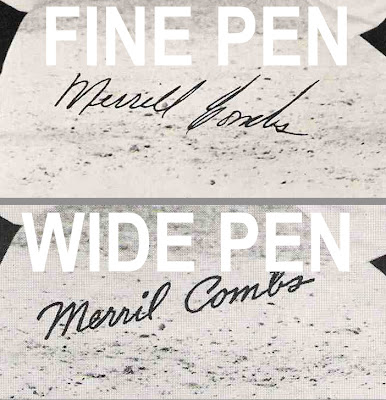 (24) Early Wynn
(25) George Zuvernick
The second set, the Wide Pen issue, came in a red, white and blue envelope titled Cleveland Indians 1952 Photos. These pictures are somewhat smaller than the Fine Pens; they measure 6" x 8 3/4".
The checklist for the Wide Pens is:
(1) Bob Avila
(2) Johnny Berardino
(3) Ray Boone
(4) Lou Brissie
(5) Merril (1 L in 1st name) Combs
(6) Larry Doby
(7) Luke Easter
(8) Bob Feller
(9) Jim Fridley
(10) Mike Garcia
(11) Steve Gromek
(12) Mickey Harris
(13) Jim Hegan
(14) Sam Jones
(15) Bob Lemon
(16) Barney McCoskey
(17) Dale Mitchell
(18) Pete Reiser
(19) Al Rosen
(20) Dick Rozek
(21) Harry Simpson
(22) Birdie Tebbets (1 t in last name)
(23) Joe Tipton
(24) Early Wynn
Chuck found three players with the same picture but different facsimile autographs: Combs, Reiser and Rosen. All the others have different poses for each player in each pack. Also, as you can see, each pack has some different players.
The appearance of Joe Tipton in the Wide Pen set indicates it was produced later in the season, as he was not on the roster until June 23, when he was claimed off waivers from the Philadelphia A's.
Regardless of relative scarcity of the two sets, there is probably little practical difference in the market value of the two versions. Each should be about $150 in Near Mint condition, half that for Excellent and $45 or so in VG. 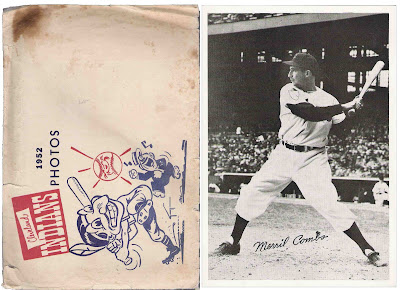