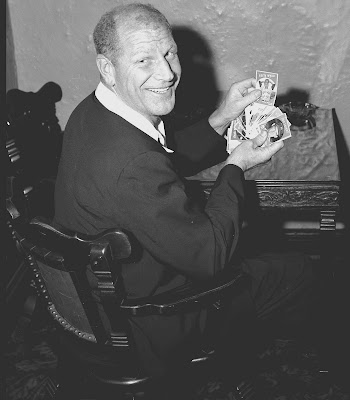 In recent months there have been thousands of vintage newspaper photos and negatives offered on eBay from a variety of sources. One of those that recently caught my attention was this 1959 photo of Chicago White Sox owner Bill Veeck displaying a handful of contemporary Topps baseball cards.
The image was offered as an original 4" x 5" black-and-white negative, and I was able to buy it very reasonably.
The photo was taken June 4, 1959, when Veeck was the guest speaker at the Headline Club dinner in Chicago's Sheraton Hotel. The caption indicated Veeck had pulled out from a group of "baseball playing cards" the card of Early Wynn, who was to pitch the next day's game.
Chicago's headline club provides support and networking for are 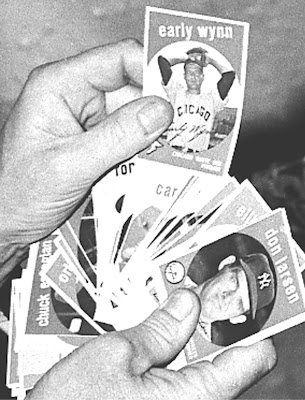 a journalists, reporters, editors, photographers, news executives, educators and students.
Wynn did, indeed, start the June 5 game against the Red Sox. He pitched seven innings, giving up six hits (including a home run to Frank Malzone), two runs, six walks and striking out five. After facing three Boston batters in the eighth with the score tied 2-2, Wynn was relieved by Gerry Staley, who got the win when Chicago scored three in the bottom of the eighth.
Besides Wynn's card, among the two dozen or 30 cards that Veeck is holding, all appear to be in the card number range of 205-278. Other players that are identifiable are Don Larsen, Chuck Essegian, Orlando Pena, Ron Kline, Carl Furillo and Ellis Burton.
That's about all there is to say about this great vintage baseball card photo; I just wanted to share it with you.
Posted by Bob Lemke at 11:01 AM