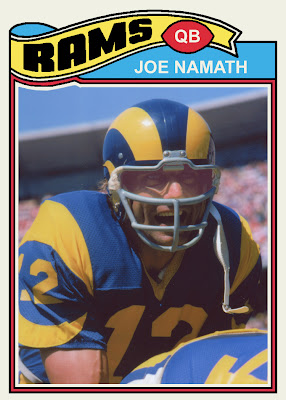 My latest custom football card creation is a bit out of my normal range.


For one thing, it's not a college football card; for another it's in a 1970s format.


As a kid, the last football cards I purchased on any kind of a regular basis were the 1960 Topps and the 1961 Fleer. By the 1970s I wasn't following football and I wasn't collecting cards.


Thus, it has been a fairly recent revelation for me that Topps cards in the 1970s didn't include team logos or identifiable helmet designs because Fleer had the exclusive with the NFL for those elements. I also didn't realize that Topps evidently had contracts with individual players, and that throughout the Seventies, some of the bigger name stars do not appear in some years.
The smaller number of cards in a football set in that era, and the need to have players represented from every team meant that each year Topps had to omit some players, especially rookies, who went on to Hall of Fame careers. In a few cases, though, it appears other factors -- probably player demands for higher royalties, kept some players off Topps cards. Lynn Swann, for instance, appeared on Topps cards in 1975-77, but never again, though he played through 1982. And Earl Campbell, who had a Rookie Card in 1979 Topps, never appeared on another Topps card through the end of his playing days in 1985.


The biggest star of the era, Joe Namath, did not appear on a Topps card after 1973. That prevented a card from picturing Namath with the L.A. Rams, to whom he gravitated for the 1977 season. Literally on his last legs by 1977, Namath was waived by the Jets and signed as a free agent by the Rams. The principal reason he cleared waivers is that any team picking him off the wire would be stuck with a $550,000 guaranteed contract. 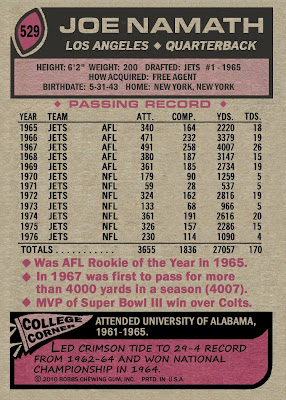 I have always been a Namath fan; principally because it cheesed off my old man.


So, when I discovered there are some really nice Namath-as-a-Ram photos available, I decided to make a card "that might have been."


My initial quandry was whether to do a 1977 or a 1978 style card. A 1978 would have been cool because the stats on back would have represented his final career numbers. In the end, I chose the 1977 because I liked the format better.


The second big question was whether to honor Topps' handicap of not being able to picture uniform logos. After seeing a couple of '77 Rams cards on which Topps had airbrushed the "horns" off the helmet, I decided not to do so on my card.
I think I made the right choice.
I'm still sitting on a nice photo of Namath in a Rams jersey without a helmet. That would allow me to make a more accurate 1978 career-summary card, but I just don't have the burning desire to do so while I have so many other custom card projects to do.