I've been a slug 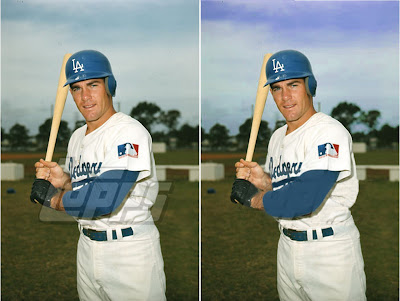 I have really been slacking off in my custom card creations. It has been six or eight weeks since I've completed a new card. I've been doing bits and pieces on several on-going projects, but haven't completed anything new.
Part of the problem was a computer change. The power supply on my old computer just crapped out. I've got a new unit up and running now, but the set of fonts that I have been relying on for my card creations for the past 5+ years was compromised. Now, each time I need to resurrect one of my old favorite fonts, I have to schlep to the office and download it from my old, old laptop, then bring it home and upload it on the new computer.
I ran into that again this morning as I was working on a 1969 Topps-style rookie card of Steve Garvey. So, I'll have to halt production on the front of the card until I get a particular font family installed.
I thought I'd share with you a bit of Photoshop manipulation I used for the pictutre on the 1969 Garvey. For the past six month or a year, the images that Topps puts on eBay of the vintage transparencies they sell from their "vault," have carried a watermark. It makes "borrowing" an image for making a card somewhat more difficult, but not impossible. With a couple of hours of noodling on Photoshop, I've been able to eliminate the watermark, or at least minimize it to the point it's not visible on the finished card.
I thought I'd share a before and after look at the Garvey photo I'll be using. Besides getting rid of the Topps logo, I've added a bit of brighter blue to the sky.
I'll be sure to share the final results here when I'm done . . . hopefully by the end of the weekend.
Posted by Bob Lemke at 10:39 AM