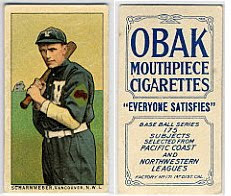 Back in the early 1980s I thought I'd combine my interests in minor league baseball and vintage baseball cards by assembling a collection of the Obak cigarette cards that were distributed on the West Coast in 1909, 1910 and 1911.I didn't realize it then, but those cards are so much rarer than most of the contemporary T206 cards from "Back East" that putting together complete sets of the Obak could take decades to accomplish -- and that's if a guy had more money than God to buy the cards when they became available.At about the time I started my Obak collection I also started researching the players who appeared in the sets. Over the course of several long Wisconsin winters I pored over microfilms of The Sporting News and The Sporting Life from the period several years before to several years after the Obak cards circulated, making prodigious notes on 3x5 file cards for each player in the set.I gave up trying to collect the T212s (that's the catalog number Jefferson Burdick assigned the three sets in the pioneering American Card Catalog in 1939), long ago, and have since sold off all my Obaks, one-by-one, first on eBay, then on the Net 54 baseball card forum. As I was selling each card, I included interesting tidbits about each player from my notes. The bidders seemed to like learning a little bit about these guys on the cards, so I thought I'd now begin sharing their stories here. Please excuse the lo-res nature of the card pictures; they were scanned for my auctions many years ago.
Known variously in his playing days as "Henry" or "Harry," Scharnweber was a light-hitting shortstop. He was born in Iowa in 1882 and spent his early years as a professional ballplayer around the Midwest.
He debuted in the Three-I (Illinois-Indiana-Iowa) League in 1902, playing for both Bloomington and Rockford at the Class B level. When he hit only .179 for the year, he was sent down to Class D Grand Forks for 1903 and Waterloo for 1904 (the team carried the unlikely nickname of the Microbes).
Scharnweber returned to the Three-I League for 1905, and spent the next four seasons with Springfield, including managing the team in 1907 at the age of only 25 (they finished third). In 1909 he moved out West to the Vancouver Beavers of the Northwestern League, also a Class B circuit. He played with Vancouver for six seasons -- remarkable consistency for the minor leagues in that era. He man aged the team in 1914 and won the NWL pennant. The team finished fourth in 1915 under Scharnweber.
His whereabouts from 1916-1919 are unrecorded. In 1920 he joined the newly formed South Dakota League as manager of the Mitchell Kernels, and at the age of 38 played some shortstop and hit .295. The Kernels won the pennant that year, and also in 1921 and 1922 with Scharnweber at the helm. One of Scharnweber's prize players in 1920 was future Hall of Famer Jim Bottomley, playing in his first pro season. The league folded in mid-1923.
Scharnweber must have hung around the Mitchell, S.D., area after his playing days, because that's listed as his locale on the U.S. Patent (#2,088,753) he was granted in 1937 for an automotive air cooling apparatus!
Posted by Bob Lemke at 2:09 PM