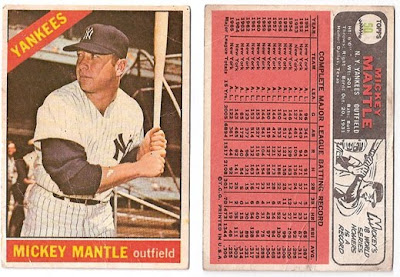 Some weeks back reader Steve Stazenski contacted us about an unusual 1966 Topps Mickey Mantle card he had in his collection. The card is unusual in that its number on back appears to
have been printed in green, rather than the usual orange/red ink. 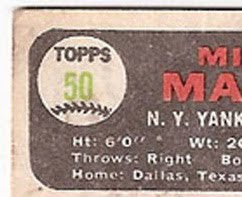 My first thought was that this might be a Venezuelan-issued '66 Topps. While I'd never heard that the card numbers of the South American version Topps cards were green, I'd never heard that they weren't.
I posed some inquiries on some of the baseball card forums and a couple of the top Venezuelan specialists informed me that the card numbers on that issue were not green, they were the same color as the player name and stats box, just like on the Topps U.S.A. cards.
One or two collectors raised the idea that the "50" on this card may have turned green as a reaction to chemical exposure. I'm not inclined to accept that theory, because there is no indication that any of the other red ink, nor the black, nor the card stock had been altered by a foreign substance.
The theory that seems most plausible to me, but which I have been unable to verify, is that this particular Mantle was cut off the three-card salesman's sample strip that Topps used back in the 1950s and 1960s to alter retailers on the look of the product. While the backs of those strips usually were predominantly given over the a sales pitch, at least one card on the strip was usually presented with a full back, again to give the retailer an idea of what the new cards had to offer.
I'm hoping that one of you can provide a scan of such a 1966 sales strip to verify this notion. Otherwise this card will have to be considered merely an anomaly or curiosity.
Posted by Bob Lemke at 10:53 AM