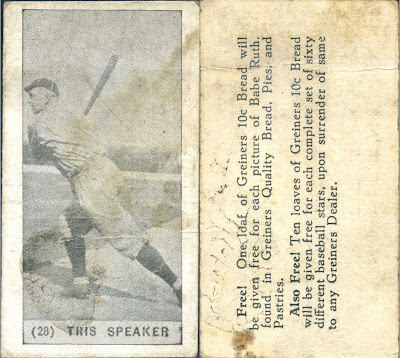 It has probably been about 10 years since we added the 1928 Greiners Bread set to the Standard Catalog of Baseball Cards. In all that time we never were able to acquire a photo to use to illustrate the listing. That deficiency has been remedied by collector Greg Zayatz, who provided the scans that appear with this post.

At one time Greg was negotiating with a fellow to purchase a group of these rare cards, but because there was no real-world pricing to reference, a deal was never made, though he did obtain two examples of the cards, Tris Speaker and John McGraw.

As indicated in the SCBC, Greiners Bread cards are a parallel of the 1928 W502 set of 60. The backs indicate they were packaged with loaves of bread and in other pastries. Product stains on Greg's cards seem to verify that. We still don't know where Greiners was located.

Besides adding the photos to the catalog listing, I'm considering deleting the pricing information that has run virtually unchanged since the set was first listed. As best I can recall, there has not been a single example of a Greiners card offered on eBay or in a hobby auction in all the time the set has been listed. That being the case, the prices carried in the 2010 book are likely low-ball and are probably best eliminated unless or until some verified sales can be recorded. 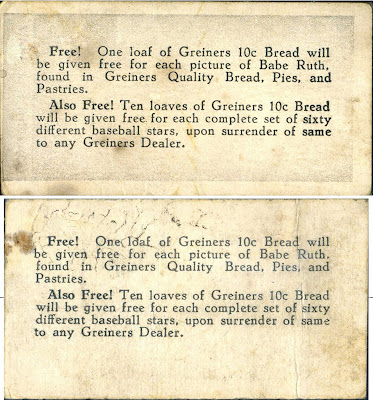