Standard Catalog Update #34 : You like Globes? We got 'em! 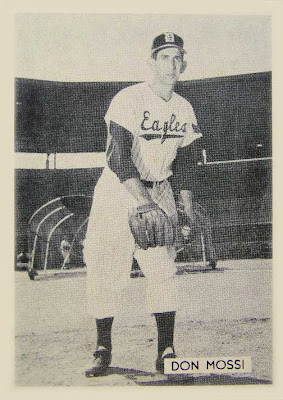 Among the subjects we regularly touch on in this space, one of the most popular appears to be the early 1950s Globe Printing Co. minor league team sets.
One of Globe's biggest fans and most ardent collectors, though he, like all other Globe collectors has a tough time finding specimens to add to his holdings, is Mark Bowers.
Mark recently sent in some enhancements to the checklist for the 1952 Dallas Eagles set which we share with you herewith.
Like all Globe minor league sets, there is nothing on the cards to identify the Dallas set as being a Globe product. And, while the Dallas cards are not identical in format to other known Globes, they have more in common than they do differences. The Dallas cards, as exemplified (BTW: Why isn't it "examplified?) by the Don Mossi pre-rookie shown here, have a white border. They are, however, in the same 2-1/4" x 3-38" size with full-length player photos in a stadium setting and a simple name strip. So, it is more likely than not that they are from Globe.
Another difference between the Dallas set and most other Globe issues, is that there are currently 21 known players on the checklist. Most other Globe sets top out at 18 cards. Since it appears that most Globes were printed on six-card sheets, we might reasonably expect to see three more Dallas Eagles cards in the future.
The Eagles were the Class AA Texas League farm club of the Cleveland Indians. Looking over their roster for 1952, about the biggest name that has not yet been seen in the set is pitcher Jose Santiago, though there were a few other cup-of-coffee future major leaguers on the team.
Here, then, is the revised checklist for the Globe Printing Co. 1952 Dallas Eagles team issue (Mark's recent additions are in bold):
Ralph Albers
Dick Aylward
Jodie Beeier
Bob Bundy
Johnny Creel
Bob Cullins
Hal Erickson
Dave Hoskins
Bud Hutson
Edward Knoblauch
Joe Kotrany
Joe Macko
Allan Maul
Peter Mazar
Dutch Meyer
Don Mossi
Clyde Perry
Ray Peters
Harry Sullivan
Frank Tornay
Edward Varhely
Posted by Bob Lemke at 9:08 AM