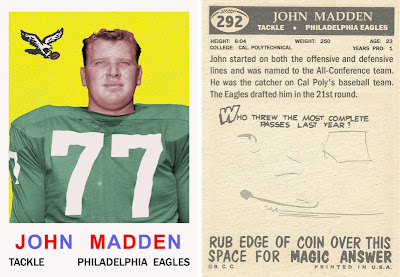 Another of my custom card creation projects has been completed, a 1959-style football card of John Madden. Love 'im or hate 'im, Madden has been a significant factor in the broadcasting realm that helped make the NFL the fan favorite that it is.

Madden started at both offensive and defensive tackle at California Polytechnical University San Luis Obispo and was the 244th player selected in the 1958 NFL draft.

He injured his knee in the Eagles training camp and never played in the NFL.

Madden was in camp long enough for the Topps photographer to take at least one photo of him, a color shot of Madden in the three-point stance. The photo, however, is so fuzzy that it couldn't have been used on a Topps card back then, or even on my custom card creation 50 years later. I was fortunate enough, though, to find a great black-and-white portrait of Madden on the internet. It appears to have been taken by the team photographer. It colorized real nice and the result is what you see above.