Considering that the Standard Catalog of Baseball Cards' 20th edition is in the works, the set which is listed as 1954 Philadelphia A's Stickers is a relatively new addition to the comprehensive guide.
It was added about four years ago with a checklist comprising 10 players, and it was noted that "The issuer of this novelty set and the exact scope of its checklist are currently unknown."
We still don't know who issued it, or how it was distributed (my best guess would be a stadium concession stand souvenir). We do, however, have a better idea of the set's scope, thanks to reports from a couple of collectors, most recently including Scott Roberts, who provided the scans shown here.
The stickers are black-and-white, printed on gummed paper. They are uniformly about 4-1/2" wide, but range in height from about 6-1/2" to 8-1/4", depending on the pose. An instruction printed on each piece says, "Moisten back. Paste on Cardboard and cut out."
In 1954, The Athletics were in their final season in Philadelphia. They ended the season with a 51-103 record, 60 games behind the pennant-winning Cleveland Indians.
Here's the revised checklist for the sticker set: 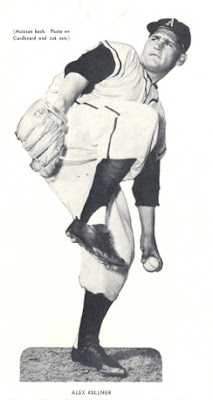 As you can see, there were no Hall of Famers on the team, and only a few players who are recognized as even minor stars today -- Zernial, Shantz, Power. The checklist stands at 20, which is a nice round number. The only regular missing is third baseman Jim Finigan. Whether or not this checklist will stand remains to be seen.
The "big book" currently lists the stickers at $25 in NM, $12.50 in EX and $7.50 in VG for most players, with a few of the bigger names at $35, $17.50 and $10.50. That seems cheap to me considering the age and scarcity of these collectibles, but the few that have sold recently at auction haven't generated sufficient demand to warrant raising the prices.
Posted by Bob Lemke at 1:06 PM