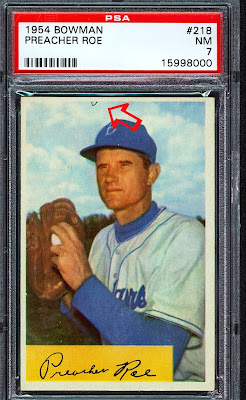 We have confirmed another "loop / no loop" variation card in 1954 Bowman, and like the other recently discovered variation, it involves a Brooklyn Dodger's card. In this case, it is #218 Preacher Roe. The report came via e-mail from collector Peter Eilenberg. That's Peter's PSA-slabbed Roe card in the picture.
Details of the earlier variation, including our theory on how the variation was created, can be found by checking out our postings of Sept. 24 and Oct. 26 regarding a similar error/correction on the 1954 Bowman Carl Erskine card.
It would be interesting to know which player's card appeared above Roe's on the printing sheet, and thus whose autograph originally intruded into the top of Roe's card. If you can provide that information, please drop me a line in the Comments section or by e-mailing to scbcguy@yahoo.com.
A check of eBay on the day this variation crossed my desk showed 12 1954 Bowman Preacher Rowe cards offered at auction or in stores. Four of those showed the loop. That's a significantly greater percentage of "loop" cards vs. "no-loop" than has been the case thus far with the Erskine variations.
The Roe variation will be added to the 1954 Bowman set in the 2011 Standard Catalog of Baseball Cards.