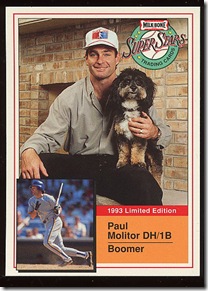 I was flipping through an album of some of my favorite baseball cards and sets from the early 1990s when I ran across the 1993 Milk Bone Super Stars set.

This set of 20 players was issued in two-card cello packs in boxes of Milk Bone Flavor Snaks and Dog Treats. There was also an offer to mail-in for the complete set, which I did.

Each card pictures a player at home with his dog or dogs. I’m a big-time dog lover, so it is little wonder that this has always been one of my favorite sets.

This time, however, while I was l 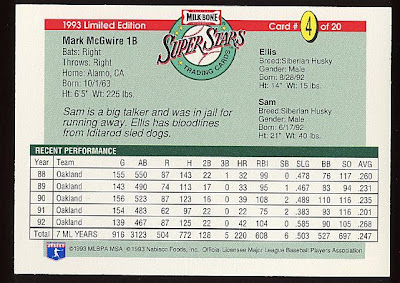 ooking over the cards a very sad thought struck me: all of the dogs pictured in this set are now gone to doggie heaven. The stats on the backs of the cards, besides giving the dogs’ name, breed, height and weight, also gives a birthdate, and none of them was born less than 17 years ago.

The players in the set are kind of a well-mixed representation of major leaguers in the early 1990s, with superstars sharing the checklist with journeyman ballplayers.

Likewise, the dogs are a good mix of purebreds and mutts. Like all dogs, they probably worshipped their human companions and didn’t know or care whether he was an all-star or a bench warmer. They didn’t care whether he was getting by on natural talent or supplementing that talent with steroids or other chemical concoctions. The dogs waited at home each night for the big guy to come home, sensing whether he’d gone 4-for-4 and would be up for a game of fetch, or whether he’d been knocked out of the box in the third inning and would need a furry head to stroke until his arm quit hurting. They didn’t even care whether he was rocking a porn’stache. 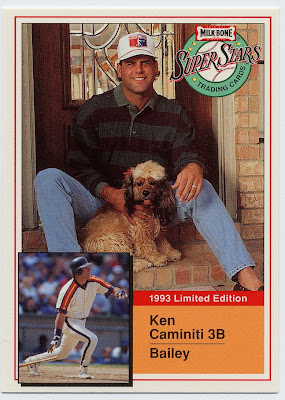 I just hope that Ken Caminiti’s dog Bailey passed before Caminiti’s death from a steroid-fueled heart attack in 2004. It is too sad to think of her waiting at the back door every night for the man who would never again come home to her.

Crap. Dogs and baseball cards are supposed to bring smiles, not tears. Sorry if this bummed you out. I’ve got a couple of more upbeat blogs about dogs on baseball cards that I’ll share with you tomorrow and Wednesday.