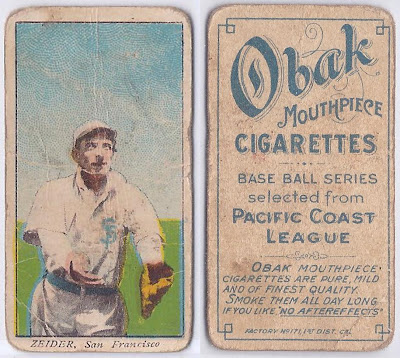 One of the players appearing in the 1909-11 Obak cigarette card sets who had a long major league career was infielder Rollie Zeider. Among the Obaks, Zeider appeared only in the 1909 issue, by the next season he had begun his big league career and was soon showing up in many of the well-known card sets of the day (T207, Collins-McCarthy, Cracker Jack, etc.).

Zeider was born in Auburn,Ind., in 1883. At the age of 21 he began his pro career in Canada with Winnipeg and Crookston in 1905. He spent parts of the next two seasons with Winnipeg, also playing with Springfield IIII League) in 1906 and San Francisco in 1907, doing a little pitching as well as playing a stellar shortstop.

The Chicago White Sox bought Zeider from the Seals for 1910, paying $5,500 and two players to be named later. Zeider played the 1910-12 seasons with the White Sox, and was with them until June 1, 1913, when he was traded to the N.Y. Yankees with the later-banned Babe Borton for bad boy Hal Chase. Zeider, one of whose nicknames was "Bunions," or the "Bunion King," suffered a serious injury early in 1913 when Ty Cobb spiked him at second base, nearly cutting off his bunions and putting Zeider in the hospital for six weeks with blood poisoning.

In 1914, Zeider jumped to the new major league, the Federal League, with the Chicago Whales, playing there until the league disbanded. In the dispersal sale of Fed players, Zeider went to the Cubs, completing his Chicago trifecta.

Zeider's big league days came to a close in August, 1918, when the majors cut their season short because of World War I. In the off-season he had the garbage disposal contract for his home town of Auburn. In 1919 he joined Toledo as player-manager, but left the team in mid-season to manage a semi-pro team in LaPorte, Ind.

With the war over, Zeider returned to California in 1920, playing there with the L.A. Angels in 1920-21 and the Vernon Tigers in 1921-22. He was very popular in the Pacific Coast League. Baseball Magazine called him, "the Hans Wagner of the West . . . the greatest drawing card out there." He split the 1923 season between Portland in the PCL and Mobile.

In 1924, at age 40, Zeider began the season wth Shreveport, but obtained his release in late June to sign as playing manager with the Paris North Stars of the Class D East Texas League, his last professional engagement.

Zeider died back in his native Indiana in 1967.