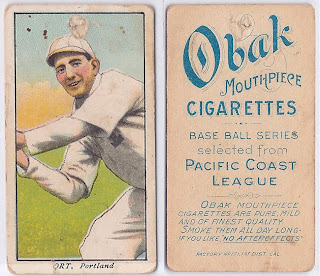 Back in the early 1980s I thought I'd combine my interests in minor league baseball and vintage baseball cards by assembling a collection of the Obak cigarette cards that were distributed on the West Coast in 1909, 1910 and 1911.

I didn't realize it then, but those cards are so much rarer than most of the contemporary T206 cards from "Back East" that putting together complete sets of the Obak could take decades to accomplish -- and that's if a guy had more money than God to buy the cards when they became available.

At about the time I started my Obak collection I also started researching the players who appeared in the sets. Over the course of several long Wisconsin winters I pored over microfilms of The Sporting News and The Sporting Life from the period several years before to several years after the Obak cards circulated, making prodigious notes on 3x5 file cards for each player in the set.

I gave up trying to collect the T212s (that's the catalog number Jefferson Burdick assigned the three sets in the pioneering American Card Catalog in 1939), long ago, and have since sold off all my Obaks, one-by-one, first on eBay, then on the Net 54 baseball card forum. As I was selling each card, I included interesting tidbits about each player from my notes. The bidders seemed to like learning a little bit about these guys on the cards, so I thought I'd now begin sharing their stories here.

George Ort, the Player Who Advertised for a Job

George Ort appeared in both the 1909-1910 Obak sets, but did not appear on any other baseball cards. He was born in Newark in 1885 and turned professional at age 21 with the Mt. Clemens Bathers of the Southern Michigan League in 1906. He also pitched one game for Waco in the Texas League. He spent the next two seasons with Lynn, Mass., before heading "Out West" where he had signed with Portland of the Pacific Coast League.

He was with Portland in the Coast League (a Class A league, then the highest designation) for 1909-1910, but then joined the city's Class B team in the Northwestern League for 1911. He also played for Seattle in the NWL in 1911 and was suspended for eight games for what the sporting press called "a cowardly attack" on an umpire.

In the Feb. 11, 1915 issue of either TSN or TSL (my notes don't specify which), Ort placed a classified ad looking for a job. The ad read "FREE AGENT. Can play in or outfield. Formerly with Portland, St. Thomas and Toronto Clubs. George P. Ort, 23 Lafayette Ave., Detroit, Mich."

The ad may or may not have worked, because he wasn't able to catch one with a higher-classification team, but he returned to the Canadian League with the St. Thomas and Guelph teams for 1915, which appears to have been his final season in professional baseball.