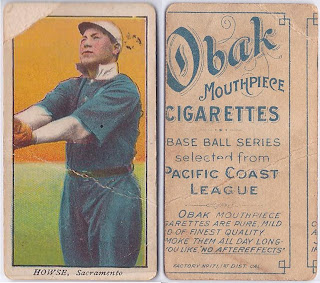 Back in the early 1980s I thought I'd combine my interests in minor league baseball and vintage baseball cards by assembling a collection of the Obak cigarette cards that were distributed on the West Coast in 1909, 1910 and 1911.
I didn't realize it then, but those cards are so much rarer than most of the contemporary T206 cards from "Back East" that putting together complete sets of the Obak could take decades to accomplish -- and that's if a guy had more money than God to buy the cards when they became available.
At about the time I started my Obak collection I also started researching the players who appeared in the sets. Over the course of several long Wisconsin winters I pored over microfilms of The Sporting News and The Sporting Life from the period several years before to several years after the Obak cards circulated, making prodigious notes on 3x5 file cards for each player in the set.
I gave up trying to collect the T212s (that's the catalog number Jefferson Burdick assigned the three sets in the pioneering American Card Catalog in 1939), long ago, and have since sold off all my Obaks, one-by-one, first on eBay, then on the Net 54 baseball card forum. As I was selling each card, I included interesting tidbits about each player from my notes. The bidders seemed to like learning a little bit about these guys on the cards, so I thought I'd now begin sharing their stories here.
"Indian John" Howse, Just His Luck
The only baseball card on which "Indian John" appeared was in the 1909 Obak set, while he was at the peak of his professional career, playing in the Pacific Coast League with the Sacramento Solons at the Class A level (at that time, the highest classification for minor leagues).
The rest of his career, so far as can be traced, was played at the Class C and D levels. With only a single baseball card to show for his career, it was his bad luck that the cigarette company spelled his name "Howse," instead of the correct House.
I have no information on when or where House was born or died, and there is even a two-year gap in his professional record. He first shows up in 1904 with Marshalltown in the Iowa League of Professional Baseball Clubs. He also spent the next four seasons in Iowa, with Ottumwa (1905) and Burlington (1906-1908).
House played for four teams in 1909, likely in this order: Minneapolis -- Kansas, not Minnesota -- in the Central Kansas League; Santa Cruz and Fresno of the "outlaw" California League and, finally, Sacramento.
I have no record of whether or where he may have played pro ball in 1910-1911, but he was back with Ottumwa in 1912-1913. He went to the Canadian League for 1914, playing for the Fort William-Port Arthur Canucks in Ontario.
There are records of a pitcher named House, first name unrecorded, with Omaha in 1914 and Victoria and Tacoma of the Northwestern League in 1915, but since John was an outfielder between 1904-1914, I doubt that it is the same player.
Posted by Bob Lemke at 2:16 PM