I’m finding the ability to “blog” about potential updates to the vintage sections of the Standard Catalog of Baseball Cards to be a tremendous asset in this, my second term, as vintage editor.

Though my skills at assembling the text and photos are still rudimentary (or perhaps those are limitations of the blog platform I’m using), it is very useful to be able to make these posts in small bites, rather than the way things were in my first tenure, when I pretty much had to wait until we could assemble a full page of items for SCD’s print edition.

Today I’m going to share a couple of “orphan” Babe Ruth cards that were brought to my attention by New York collector Barry Gordon.

Don’t adjust your monitor, the first of these is in black-and-white because it was sent in the form of a photocopy. It’s funny how that seems so lo-tech today, when it wasn’t so many years ago that photocopies were the most inexpensive and efficient way to share images. 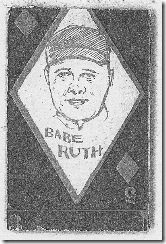 Shown at left is what appears to be part of a third W-UNC Playing Strip Cards set of the 1920s. We already list two similar, but definitely different, sets in the “big book.”

This issue measures about 1-5/8” x 2-5/8” and is printed in black-and-red on thin white cardboard, blank-backed. We know of only two cards in the “deck,” Ruth as the 5 of diamonds and Lou Gehrig as the 5 of hearts.

Naturally, our intention in publishing these Updates is to seek your input in the form of new information, additions to the checklists, etc. You can comment here, or e-mail me at scbcguy@yahoo.com.

The second Ruth submitted by Barry is a little larger, at 2-3/8” x 3-3/8”. It has a familiar Ruth photo in sepia within wide 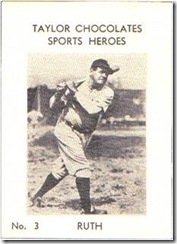 You can see the inscriptions. As you may have come to understand by now, I tend towards what I view as a healthy skepticism when confronted with a card making its first appearance in hobby circles after 50 or 75 years of purported existence. There are just so many crooks out there looking to take advantage of collectors. I used to be especially cynical when the discovery card was a Babe Ruth or Lou Gehrig, but I’ve come to the realization that if a person was going to save a baseball card from an obscure issue of his childhood, it would be more likely that he would save a superstar than a benchwarmer.

I tried googling (I love how that has become an action verb) Taylor Chocolates, without success. The use of the phrase “SPORTS HEROES” on the card suggests this might be a multi-sport issue, but so far we know of nothing else from this set.

While I am inclined to add the strip playing card set to the catalog for 2011, I’m going to reserve judgment on the candy card until more supporting evidence is at hand.

Weigh in if you can help. Thanks much!

Update update . . . I've received an e-mail from Rob Lifson, principle of REA Auctions, and he is certain the Taylor Chocolates Ruth card is not what it purports to be. He gave me permission to quote him here.

I saw your blog post on the Taylor Chocolates Ruth and your instincts are right on the money! That is not a real card - It is not a reprint in that there is no original - It is simply a "fantasy card" produced to look old and fool people. It is definitely not real. I remember when they "surfaced" - it's been a while (guessing 25 years) so they have a little age to them for real but the fact is that the card itself is not real - not a chance in the world! I am very familiar with this card - you can tell the paper isn't even right. This was a nice try by someone long ago to create a "rarity" but it did not work.

I'll take Rob's word for it!