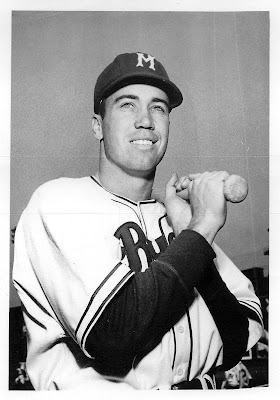 Dang! I'm in a quandry. Veteran pre-1960s minor league and regional collector Mark Bowers of California has sent me data (including the two gorgeous photos you see here) on a really great minor league collectible.
Exactly what kind of minor league collectible is not perfectly clear but I'm willing to go with his assessment that they are a team-issued set of media and/or promotiona photos of the 1948 Montreal Royals. champions of the International League that season and proving ground for most of the stars and journeymen who would populate the Brooklyn Dodgers' dugout from the late 1940s through the team's move to Los Angeles.
These black-and-white glossy 5" x 7" blank-backed photos certainly don't fit the definition of baseball cards, and without player identification or facsimile autographs, they likely were not a concession stand souvenir picture pack. That makes Mark's theory that they were intended for media use even more plausible. 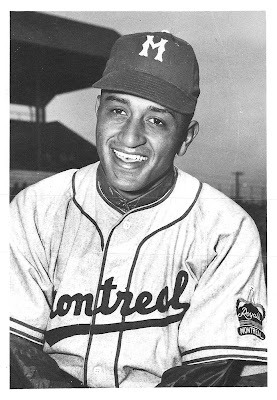 Here is the checklist provided by Bowers, arranged alphabetically:

There do not appear to be any big names from the Royals' roster missing, but it is possible, even likely, that this checklist is incomplete.

A few other notes on the checklist. The only players who did not appear in the majors were Lou Welaj, Frank Laga and Clay Hopper. Gene Mauch's appearance is an anomaly, since he did not play with Montreal in 1948, and had not been with the team for several years. It's possible that he was in spring training with the Royals, as he played 12 games with Brooklyn in 1948 before being waived to the Cubs. Mauch, of course, returned to Montreal as manager of the Expos from 1969-75.

Mark said he has seen a similar photo of Jackie Robinson being sold as an 8x10 reprint, but of course Robinson was not with the Royals in 1948. Mark also believes that some of the 1948 pictures have been reprinted as 8x10s. The 5x7s listed here are completely blank-backed. Some reprints will show on their backs the name of the photopaper manufacturer, such as Kodak.

So, here's the dilemma, since these really aren't cards, and they weren't issued as collectibles, I'm unsure whether they should be included in the 2011 edition of the Standard Catalog. Space is at such a premium in a book that size, and the vintage minor league section is not a high priority with the book's core buyers. I guess I have no problem with adding the set to the data base from which the catalog is drawn, that way the data is preserved for hobby posterity, and if the use of DVDs as a vehicle to publish the catalog data continues to expand, the can easily be accommodated there.

The last thing I want to do is to discourage collectors from sharing such discoveries because, while the Standard Catalog of Baseball Cards can no longer put in ink-on-paper every listing in our data base, the ever expanding technology and "reach" of electronic media means that someday this data will be readily available.