Standard Catalog Update #10 : They Reprinted What? 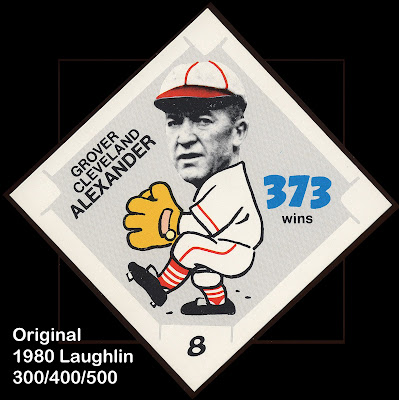 I'd never have credited it, but the proof is right before my eyes.


Pennsylvania collector James Gallo reported that he had observed the existence of a reprint set of the 1980 Laughlin 300/400/500.


That set was one of a dozen or so collectors' issues released by sometimes Fleer artist R.G. Laughlin back in the days when players, teams and leagues weren't so hard-assed about somebody profiting from their likenessess and logos without cutting them in.


The set has been listed in the Standard Catalog of Baseball Cards forever, with the price of a Near Mint set pegged at $25 for many years and no recent on-line sales to indicate demand is sufficient to consider raising that "book value."


At my request, James sent a set of original Laughlins and what he suspected to be a reprint set. Darned if he isn't right! A comparison under magnification shows that the suspect set was made by rescreening genuine cards, resulting in lighter photo faces, and "blurrier" uniform details and lettering, since those details are now comprised of strings of multi-colored dots rather than solid, sharp-edged colors as on the originals. The card stock is indistinguishable between the two versions. 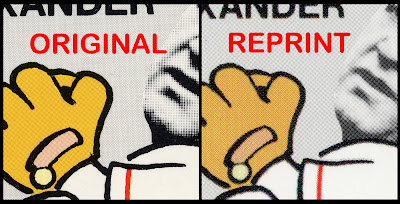 There's no question the set was reprinted. But when, and by whom? The set has never been valuable enough to go to the expense of such a reprint in an effort to satisfy runaway demand from the hobby.


Whatever . . . we'll make a note to that effect in the set's listing when the 2011 catalog is published this time next year. Thanks, James, for sharing your observation with the hobby.


You can always pick my brain about suspected counterfeits, reprints, etc., but remember that I'll probably have to see examples in-hand to make a reasoned evaluation.