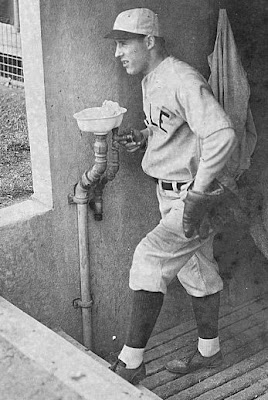 Here's another photo of a famous football player in another context. It's college football Hall of Famer Albie Booth.


Booth was a diminutive (5'6", 144 lb.) three-sport star at Yale. He was born in New Haven and was a home-town favorite with the Bulldogs' sports fans. He was a tailback in Yale's single-wing offense and the team's kicker. He was captain of the school's basketball and baseball teams as an upperclassman.


He became nationally famous in 1929, coming off the bench with Yale losing to Army 13-0. He scored all 21 of Yale's points (two rishing touchdowns, a 65-yard punt return TD and three extra points) to upset Army. Many observers felt Army took unsportsmanlike revenge on Booth when the teams met the following season, intentionally throwing an interception and the gang-tackling him, injruing him so severely he had to be carried off the field on a stretcher.


As a senior in 1931 he earned further fame in "The Game," when unbeaten Yale faced unbeaten Harvard. Booth's late-game drop kick field goal gave them the win 3-0.


After a lengthy hospitalization, Booth returned to action with Yale's baseball team in the spring of 1932, playing "brilliantly" according to the Associated Press caption on this photo, in games against Tokyo's Rikkio University team, and against Colgate, when the picture was taken on May 11. In the last game he ever played in an sport for Yale, Booth's two-out grand slam home run beat Harvard 4-3.


After college, Booth coached football at Yale and NYU, played a little semi-pro baseball and basketball and became a highly regarded football referee. He died of a heart attack in 1959, aged 51.
Posted by Bob Lemke at 1:15 PM