As promised yesterday, here is my third (and probably final) look at dogs on baseball cards.

The card featured here is one of my all-time favorite baseball cards of any era. It is a circa 1888-1890 Old Judge cigarette card of Art Whitney, who was a good-field, no-bat third baseman and shortstop from 1880-1891 all over the National League, American Association and Players League (all major leagues in their day). 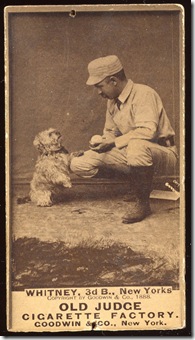 Whitney is shown on this card with the New York Giants (he appears in the same photo on a slightly earlier Old Judge card, on which he is identified as a member of the team then called the Pittsburg Alleghenys.

Whitney is also pictured, you will notice, looking like he is having a game of fetch with a curly coated little mutt. I call him a mutt because the several really knowledgeable  dog persons to whom I have shown the card don’t believe the dog on the card is a purebred.

One winter I spent a lot of hours poring over microfilm of The Sporting News and The Sporting Life weekly newspapers trying to determine whether the Pittsburgh team of the late 1880s had a canine mascot, but could not find any mention of such.

This card is one of the most popular of the 3,500+ Old Judge baseball cards issued between 1887-1890. While Whitney’s other poses sell at “common” card prices, the card with the dog brings prices that exceed all but the biggest stars among the Hall of Famers in the set. The 2009 Standard Catalog of Baseball Cards lists this card in Near Mint at $4,800, at $2,150 in Excellent and $1,200 in Very Good. Those prices are about 7-10X common-card values.