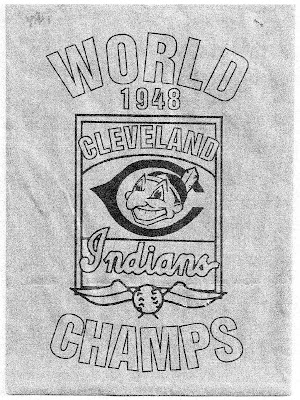 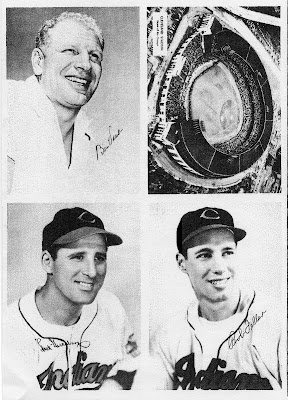 A new version of the 1948 Cleveland Indians team-issued picture pack has been reported by East Coast collector and long-time Standard Catalog contributor Bill Atkinson.
At the 2008 Greater Boston Sports Collectors Club show he bought a post-season 4-in-1 set.
The set of 5" x 7" cards was issued in a manila envelope that identifies the team as "World Champs."
Each card in the set has four downsized versions of the photo pack pictures that had been issued earlier that season. There were 33 pictures in the full-size set; the 4-in-1 set contains eight cards. Missing from the 4-in-1 version is the picture of Hank Greenberg in civvies, and Al Lopez. The difference is made up by having Bob Feller's picture on two of the 4-in-1s.
Lopez is missing from the World Champs set because he played his last game for the Indians, his only season with the Tribe, in mid-September. He was released in early October and signed on with the Pittsburgh Pirates organization, for whom he had played 1940-46, as a playing manager with the Indianapolis Indians, one of the Bucs' top farm clubs. After three seasons with Indianapolis, Lopez returned to the Cleveland Indians as manager and took them to the World Series in 1951.
I won't print the checklist of the 4-in-1s here. The set will be added to the Standard Catalog data base and will be published in the 2011 edition . . . if we continue to include team-issued photo packs in the vintage section of the printed catalog.
Bill also sent along a report of a baseball collectible that probably won't seen print in the catalog, but is nonetheless worth preserving in the historical record.
What it is, is a paper insert that was included, reportedly only in the Boston area, in boxes of Between the Acts Little Cigars around the time of the World Series between the Red Sox and the Chicago Cubs. 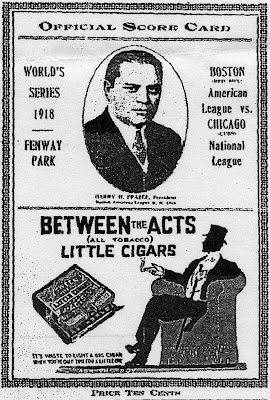 The approximately 2-1/2" x 3-1/2" card is a reproduction of the cover of the "Official Score Card" for the series. It pictures Red Sox owner Harry Frazee.
Bill says the identification of this item as a true tobacco insert was made by renowned vintage dealer and tobacco-era specialist Terry Knouse.
Bill estimates the value of the insert at $800.

Please excuse the quality of the image in this post, they were made from photocopies.