I don’t know when or whether these items will see print in the Standard Catalog, but it’s certainly worth trying to generate further information about the issues and checklists of the sets in which they were issued. While neither is a “card,” both are of the type of memorabilia that we have traditionally listed alongside the cards and which are of interest to a lot of vintage minor league collectors. 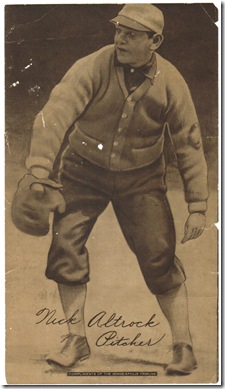 The first comes to us from long-time catalog contributor Paul Stewart. The item is a premium issued by the Minneapolis Tribune. Since Nick Altrock pitched for the Millers from 1909-11, Stewart logically assumes that the picture was issued in that time frame. Unlike many similar periodical premiums of that era, there is no date of issue indicated on the picture.

The picture measures 5-1/2” x 9-13/16” and is printed blank-back on what Paul describes as typical newspaper premium insert stock, similar to that used for the more commonly encountered Sporting News supplements that were a contemporary issue.

The second minor league issue we present appears to be a team-issued photo from the Spokane Indians of the Pacific Coast League. Picturing Johnny Werhas, the blank-back 8” x 10” picture is likely part of a photo pack or other promotional issue. 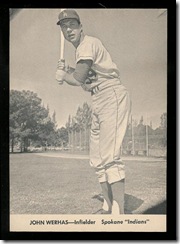 Werhas played for the Indians virtually full-time from 1962-66, with cups of coffee with the parent L.A. Dodgers (in whose uniform he is pictured in the photo) in 1964 and 1965.

We’ll need a bigger sampling of the checklist to narrow down the year of issue, but with the number of Pacific Coast League specialist collectors out there, I’m fairly confident further information will be forthcoming.