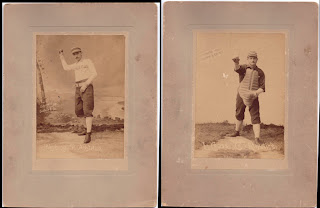 A New Jersey coolectibles dealer has sent for verification four "oversize" 19th Century baseball cabinet cards.
He thought the hobby should be aware of what he believes are two new poses of Old Judge cabinets. Each of the cards measures about 6-7/8" x 9-1/8" (give or take a 1/16"), on rather generic gray cardboard backing consistent with many cabinets of the era.
Glued to the center of each is what I believe to be three Old Judge cabinets and a Newsboy that were cut down to about 4-1/4" x 6", and had the advertising top layers removed.
I can confirm that the odd card of the group was, indeed, once a Newsboy cabinet of John Ward -- the pose with his arms folded. That's verifiable by the appearance twice on the remaining photo of the number "586".
One of the putative Old Judge remnants is the popular "Ewing. & Mascot." card.
What appears to be a pair of previously uncataloged N173 poses are "Weyhing, P. Athletic's," and "L. Cross, C. Athletic's".
The Weyhing is Gus Weyhing, who is pictured with his right hand cap-high. The only other cataloged Gus Weyhing Old Judge cabinet has his pitching hand chest-high.
Lave Cross was previously known in N173 only with Louisville, in a "hands on thighs" pose. The new discovery shows him with his right arm extended head-high. While the card's caption shows his team as "Athletic's," he's wearing a dark Louisville uniform under that chest protector.
It's possible, of course, that the Weyhing and Cross cabinets never actually wore Old Judge advertising, but were originally on a more generic cabinet, but like they tell medical students, "When you hear hoofbeats, think horses, not zebras." Both the Weyhing and Cross discoveries have the Goodwin & Co. 1888 copyright on the photo.
There is an interesting pencilled notation on the back of the Ward card that says:
"100 For Ruebler
200 " Store Stock Made June 11, 1894"
Horrors! Does this indicate that 300 other baseball cabinet were similarly mutilated a century back?
The cards were shared with you courtesy of Doug Keefe, who operates Beachcomber Collectibles in the Shore Mall in Egg Harbor, N.J. He indicated that given the current state of the baseball collectibles market, he's not going to offer them for sale at this time, but rather use them as decoration in a new shop he's furnishing.
Posted by Bob Lemke at 4:40 PM