Yesterday I promised to follow up on my rather melancholy post about dogs on baseball cards with something less somber. This is it, but try not to think too hard about how old the dogs on these cards are getting to be.

While it may not seem like it, the number of baseball card sets issued each year is down significantly from what it was in the late 1990s and early 2000s, when there were five or six major manufacturers vying for market share with dozens of brands at all price points and uncountable numbers of parallel sets.

Those card companies were also vying for the best work of the professional baseball card photographers. With many cards using two, three or even four photos of the player, it was obviously a challenge for the art directors at the card companies to find enough good quality photos.

A side effect of that photo flood was that many of the cards from that era feature something other than standard game-action or posed-portrait shots. These novelty shots range from the ridiculous to the sublime, with real art photos sharing the same card set with real schlock.

Some of my favorite novelty photos from the big card companies’ sets in those days show players with a dog. In most cases we don’t know if it’s their dog, the photog’s dog or maybe a fan’s dog.

There may be other modern player/dog cards out there of which I am unaware (I have one more dog card to present to you, tomorrow). If you have one, share it with us here. 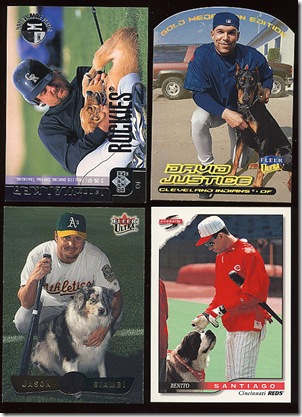 Clockwise from upper-left we have Larry Walker relaxing with what looks to be a loveable mongrel on his 1998 Upper Deck card. On the Gold Medallion parallel in 2000 Ultra, David Justice is posed with a big, lean doberman. On a 1996 Score card, Benito Santiago is making nice to Reds’ team mascot, Marge Schott’s St. Bernard “Schottzie” and Jason Giambi poses with what looks like an Australian shepherd on a 2002 Ultra.