My latest custom card project was the creation of a 1976-style Dale Murphy.

Murph, of course, made his baseball card debut in 1977 as a bug-sized portrait on one of those four-player Topps "Rookie Catchers" cards.

I was a long-time Dale Murphy fan. He is as fine a human being as he was a ballplayer. It doesn't look like he'll ever make the Hall of Fame, but I get the feeling that he doesn't lose any sleep over it.

He was part of those early 1980s Atlanta Braves teams that I began to follow when TBS was the "superstation" and brought the Braves to all corners of the country on that newfangled cable television.


Since Murphy made his major league debut in 1976, it would not have been unprecedented for Topps to have anticipated his preferment and included him in that year's baseball card set. I think my custom is a pretty good approximation of what a 1976 Topps Dale Murphy rookie would have looked like.

I dithered for a while about whether to include the Rookie All-Star trophy on my card, and ultimately decided against it. The trophy seemed too distracting and forced me to move the portrait to the left. I think I made the correct decision. 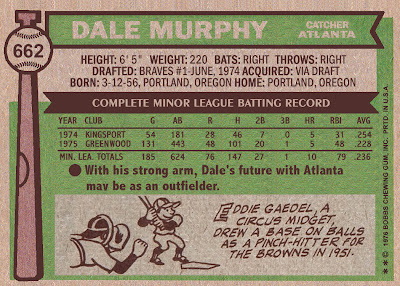