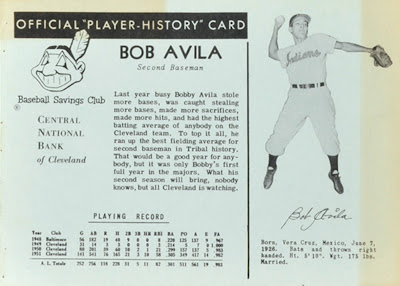 A couple of years before I left the full-time employ of the Standard Catalog of Baseball Cards, we added a listing for an "Official 'Player History' Card" card issue of 1952 from the Central National Bank of Cleveland.
I don't recall now who submitted that original card, Early Wynn, for listing, but we speculated at the time that there were more players included and that the cards were likely given away as premiums to encourage participation in the "Baseball Savings Club."

We know have confirm that such was indeed the case. The confirmation comes in the form of a complete 20-card set, along with a letter that seems to have accompanied the Early Wynn card in a promotional effort aimed at youngsters.

What I did get wrong in that initial listing was that the cards were all printed in dark blue on cream colored stock. In fact, the 6-3/4" x 4-7/8" cards are printed in black, and can be found on yellow, orange or blue blank-backed stock. All share the format of the sample shown. 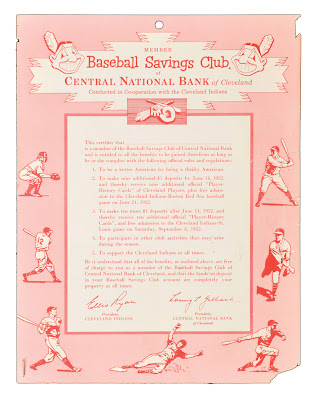 The 20-card set was offered in the Legendary Auctions sale Aug. 5 in conjunction with the National Sports Collectors Convention in Chicago. The cards and accompanying 8-1/2" x 11" letter, all suffering either staple holes or a small bit of missing paper or discoloration of the card stock, but otherwise looking to be about VG-EX condition, sold for $11,950.

Coincidentally, a second group of 16 of the Central N.B. Indians cards was also made public on Net54baseball.com, an internet forum dedicated to collectors of vintage baseball cards in early August.

The checklist of 20 Cleveland Indians cards in the set is: