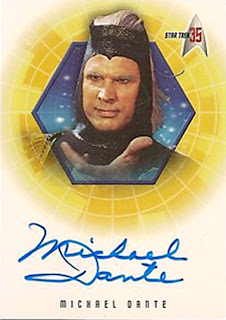 Like many baseball players of the 1950s, Ralph Vitti occasionally appears as an autograph guest at conventions, and his cards can be purchased nearly every day on eBay.
However, you might not recognize him as Ralph Vitti and he doesn't sign at card shows, but at Star Trek conventions. He's better known as Michael Dante, a TV and movie actor from the late 1950s through the 1980s.
﻿﻿
﻿﻿

Dante appeared in more than 50 movies and 150 television episodes, but is best known today for a single guest appearance as the alien Maab in the "Friday's Child" episode of Star Trek in 1967. That same year he had a recurring role as Chief Crazy Horse in the TV series Custer.
Dante's tall, dark, leading-man good looks got him his break in Hollywood, but his ability to adapt to a wide variety of roles kept him busy in show biz for more than three decades.
The actor known as Michael Dante was born Ralph Vitti in 1931, in Stamford, Conn. He played ball and began studying acting at the University of Miami. In 1949, the Boston Braves discovered him playing semi-pro ball in a fast New England league and signed him to a pro contract at the age of 18.
﻿
﻿

He played shortstop for three seasons in the minor leagues, never rising above the Class B level, generally hitting under .250 with no power.

In 1950 he was with Class D Olean (Pony League) and Owensboro (Kitty League). At age 19, he was with Alexander City (Class D Georgia-Alabama League), Gloversville-Johnston (Class C Canadian-American League) and Fayetteville (Class B Carolina League).

After injuring his arm, he sat out the 1952 season, and left pro ball after a brief comeback in 1953 with Pocatello of the Pioneer League (Class C).
His first acting job came in the 1956 movie Somebody Up There Likes Me. For the 30 years he had guest roles in many of the TV Westerns of the time, along with soap operas, cop shows, etc.
You can view his "filmography" at the Internet Movie Database, www.imdb.com and his minor league baseball career at www.baseball-reference.com . Be sure to search under Michael Dante on the former site, and Ralph Vitti on the latter. Vitti/Dante never got high enough up in professional baseball ranks to appear on any baseball cards, but in 2002 and 2007, on the 35th and 40th anniversaries of Star Trek, he appeared on autographed cards in sets produced by Rittenhouse Archives.
Posted by Bob Lemke at 10:55 AM