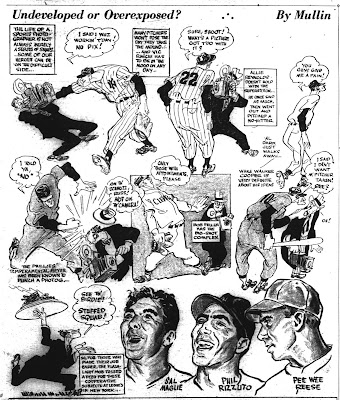 Since the photographs that appear on baseball cards are probably the single most important element, I found it interesting that in 1953, the New York's press photographers honored three of the city's players as being the most co-operative.

The Jan. 21 issue of The Sporting News covered the occasion in a major league way. giving over most of that issue's front page to a cartoon by Willard Mullin that offered some great insights into some of the guys we see on our early Fifties baseball cards.
The accompanying article was written by New York World-Telegram baseball beat writer Dan Daniel. It was headlined "Phil, Pee Wee, Sal Hailed as Photogs' Pals".
The pertinent portion of the coverage began, "Phil Rizzuto of the Yankees, Pee Wee Reese, Dodgers, and Sal Maglie, Giants, two great shortstops and a pitcher, marvelous guys on and off the field, were honored in the second annual sports citation dinner of the Press Photographers Association of New York, at Leone's popular restaurant, on the night of January 12.
"To the Scooter, Pee Wee and the Barber went bronze plaques as the cameramen's choices of the ultimate in co-operation. The baseball writers would do well to sponsor a similar award, but as yet they have done nothing in that direction," Daniel commented.

"There is only one citation, really, by the disciples of Mons. Daguerre, but the election resulted in a triple tie, and rather than have a runoff, the lensmen made three awards."

According to the article, more than 100 cameramen, baseball officials and baseball writers attended the dinner.


Strictly coincidentally, about the time I first encountered this article while reviewing TSN microfilm, a photograph appeared on eBay showing the photographers' association president Jack Downey presenting Rizzuto, Reese and Magline with their awards. 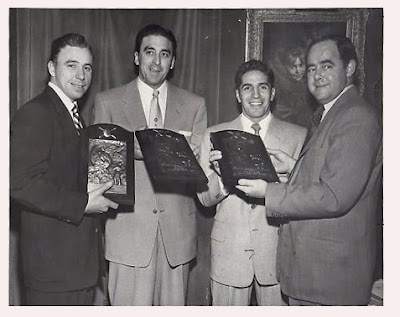