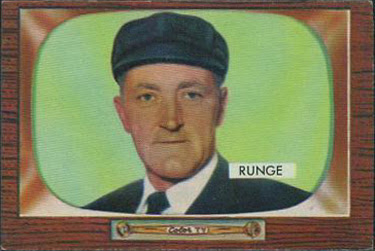 Two of the umpires featured in the 1955 Bowman high-numbers subset of arbiters nearly appeared in the pages of a scandal sheet when they were victims of the old badger game in 1960.

On Aug. 26, while working games in Washington, D.C., American League umpires Bill McKinley, age 50, and Ed Runge, 42, met a 21-year-old stripper in the Gaity Supper Club, which The Sporting News described as “a joint on Baltimore’s ‘The Block,’ a section of gaudy raucous night clubs.”


The stripper, said to specialize in the Egyptian belly dance, was introduced to the umpires by the club’s manager.


Two nights later, the umpires found themselves at a Hyattsville, Md., motel, with the stripper and another dancer, age 24.


Two men soon burst into the room with a camera, snapped a photo and said, See you in court,” before fleeing.


The umpires returned to their hotel in Washington, and after a night of “soul-searching” decided to call in the Baltimore police.


That night, an envelope with a print of the incriminating photo and a phone number was slipped under the umps’ hotel room door.


Phoning the number, they were instructed to meet after the next day’s game and warned that, unless payment was made, the “picture would be sent to some scandal magazine and the American League president,” and possibly the umpires’ homes.


The initial blackmail demand was for $5,000 in exchange for the negative. When Runge and McKinley said they couldn’t come up with that kind of money, one of the extortionists told them, “You can square this thing by doing business on the field,” an offer the umpires said they turned down immediately.


Following several phone and personal negotiations, the blackmailers agreed to settle for $3,000 and a game to be thrown.


Just like on television, when the blackmailers met the umpires at a Baltimore airport, the police were waiting.


According to New York sports columnist Dick Young, “The two shakedown artists were tough, gun-carrying hoods.” Young said that when the trap was set, one state trooper “was stationed with a tommy-gun, another with a shotgun, at opposite ends of the waiting room."


The two cameramen and the dancer who had first made contact with Runge and McKinley were charged with attempted extortion. The second stripper was held as a material witness, presumably upon her agreement to testify against the others. She told the papers, “It is the old story—you can’t be too careful about the company you keep.”


American League president Joe Cronin said, “I’m happy that the umpires reported the incident. It’s the first time in 75 years that anyone has tried to tamper with an umpire.”


Cronin then granted the umps’ “request” for a leave of absence for the remaining three weeks of the season.


In praising Cronin for his actions, The Sporting News later said that the league president had “furloughed” the frisky umpires. “There are overtones and undertones to all this that are not altogether happy,” TSN editorialized, pointing out that if allowed back on the field “until the whole thing is settled,” Runge and McKinley “could be the subject of criticism or abuse.” You think?


In the tradition of many other wives of politicians, celebrities and athletes caught with their hand in the nookie jar, Runge’s wife publicly stood beside him and “declared she was satisfied her husband had done nothing wrong.”


“They don’t come any better than Ed,” Mrs. Runge said, “He’s never done anything to be ashamed of in his life.”

If Mrs. McKinley made any public statement, it was not reported by TSN.

I didn't read far enough ahead in The Sporting News to find out what justice was meted out to the blackmailers. There doesn't seem to have been any long-term consequences to McKinley's and Runge's umpiring careers arising from their indiscretion. McKinley continued to serve as an American League umpire until 1965, Runge until 1970. 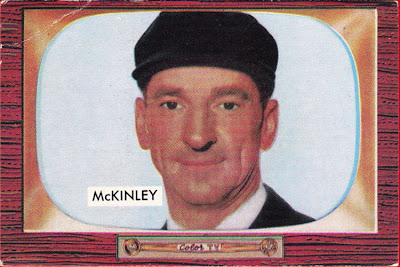