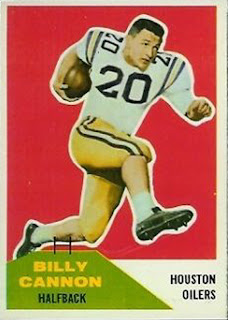 
I was barely cognizant of college football in 1959. Thus I have no first-hand recollection of that most heartbreaking of Ole Miss losses, on Halloween night when LSU’s Billy Cannon’s 89-yard punt return gave the Tigers a 7-3 victory and possibly cost the Rebels the national championship.


Ole Miss got its revenge in the Sugar Bowl, shutting out LSU 21-0, including the first touchdown pass thrown them in 14 games, while holding the Tigers to a negative 15 yards of offense. Cannon was held to eight yards on six carries.

Winner of the Heisman Trophy, Billy Cannon was one of the biggest names to appear in Fleer’s inaugural American Football League card set in the summer of 1960.

As I mentioned on the back of my 1955 All-American style custom card of Cannon, he went on to a modestly successful pro football career before turning to dentistry and counterfeiting.
Until I read the microfilm of The Sporting News for 1960, however, I was unaware of the NFL-AFL bidding war for which Cannon was the prize.
He was the L.A. Rams first-round selection in the NFL draft, but under the goal posts in New Orleans after the Sugar Bowl, Cannon signed a contract to play for the Houston Oilers.
Rams’ general manager Pete Rozelle fumed, threatening to take Cannon and the Oilers to court, claiming, “I have a legal, valid and binding contract with Cannon.”
What did it take for the Oilers to sign Cannon?
According to TSN, Houston gave Cannon a signing bonus and three-year contract that totaled $100,000.


Off-season, Cannon would join Houston owner Bud Adams in the “oil bidness,” operating three service stations for $1,000 a month each, plus 50 percent of the profits.


Left open for discussion was a proposal for Cannon to lend his name to a chain of “Billy Cannon Health Centers” that Adams would open throughout Texas.


Obviously the Oilers hadn’t been scared off by Cannon’s lackluster performance in the Sugar Bowl. And their confidence must have been restored on Jan. 10, when he starred in the East’s 34-8 win over the West in the Hula Bowl.


In his last college football game, playing for his LSU coach Paul Dietzel, Cannon returned a punt 59 yards for a touchdown in the first three minutes of the game. He scored again on a 12-yard pass from Penn State’s Richie Lucas and capped his college career with a four-yard TD run.


Today, Billy Cannon’s rookie card (at top) in the 1960 Fleer set is among the most valuable of that issue, worth $25-40 in NM condition. The 1955 All-American card shown here is my custom card tribute to Cannon. 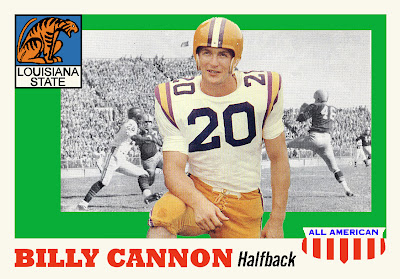