Bo (the other Bo) had a one-card set 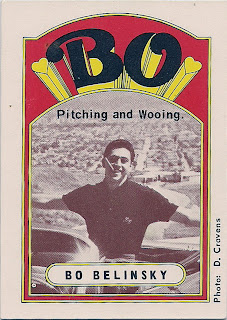 The Standard Catalog of Baseball Cards is rife with what I call "one-card sets."
These are baseball cards in the old-school sense that they were issued to promote the sale or use of a product or service. Off the top of my head, I don't know when the first one-card set was issued, which player was pictured or what it was intended to promote. Likewise, while I suspect that they are still being issued, I can't tell you about any that might have been issued in recent years, since I barely follow baseball these days, and have zero interest in current cards.
Back in the days when I was working full-time (and more) cataloging vintage cards for the "big book," I was diligent in trying to capture data about single-card sets issued prior to 1981. When I returned to catalog duty in 2009 after a few years away, it was on a very limited part-time basis, and running down one-card sets to add to the catalog just wasn't efficient use of my time.
I'm going to make an exception, though, for a card that was recently reported by a long-time hobby colleague and catalog contributor, Tim Pulcifer. The one-card set that he reported is different because it is something that has been on my radar for decades, but was never listed in the catalog.
I believe that's because somewhere or other in my old files I had only the image of the card's front, and without the information that's on the back, it was impossible to attribute.
Also arguing for special attention is the fact that the card pictures a player that was a personal favorite of mine in the 1960s, Bo Belinsky. I once owned a game-used Belinsky L.A. Angels flannel jersey.


Pulsifer describes Belinsky as one of baseball's "colorful characters" of the era. That's an understatement,
Tall, dark and handsome, he was West Coast baseball's answer to Joe Namath in terms of womanizing and occasionally brilliant on-field performance. He began his major league career in 1962 with four straight wins, the fourth being a no-hitter. Also like Broadway Joe, Belinsky was more about style than substance, and the totality of his career was mediocre, at best.
Still, in the early 1960s, when he had a no-hitter under his belt, a buxom platinum blonde on each arm, and a Cadillac convertible at his fingertips, he epitomized the playboy-athlete and was the darling of Hollywood. 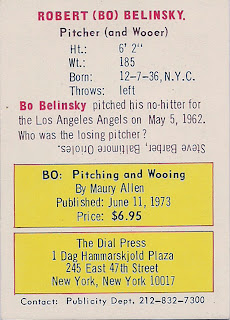 It was inevitable, then, that a book would be forthcoming, and it's that book that this card was issued to promote. I read Pitching and Wooing many years ago. I remember it as more self-aggrandizing than inside baseball. It might be worth a re-read today.
Too bad Bo died relatively young, at 64 in 2001. An updating of his biography would have been interesting. You can check Wikipedia to get a flavor of Bo's story.
I still have a few Belinsky cards in my binder of favorite players, but never owned this promotional card. Tim got lucky and found his on the internet, paying $1 for it from a seller in Denmark.
I'm unsure how the card was distributed, and it's not common today. Collectors of vintage cards, of course, will recognize the design on the front as a take-off on Topps' 1972 baseball card issue.
Posted by Bob Lemke at 8:40 AM