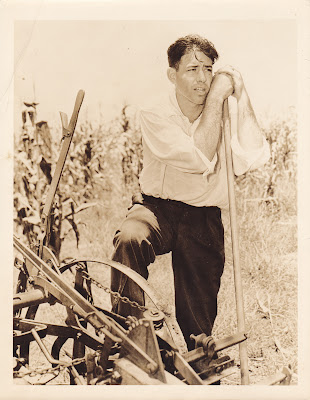 Yesterday we shared a photo from among a couple of hundred accumulated over 30+ years. The picture was of 1930s first baseman Zeke Bonura working his cabbage farm.

In the same vein, presented here is a picture of St. Louis Cardinals pitcher Paul "Daffy" Dean tending to his farm. Unlike the Bonura picture, however, this was not an off-season scene.

This International News Photos picture was datelined July 25, 1938, at Dallas, Tex. At that time, Dean had been virtually out of the major leagues since Aug. 24, 1936, sidelined by a sore arm. He had pitched only once in 1937, facing three batters on April 24, hitting two of them and giving up a hit to the third.

There is a haunting quality about this portrait of the sidelined Dean, that the caption writer effectively captured.

Under the almost non-sensical headline "The sun is horsehide and bleachers fill the horizon," the caption reads, "The young man with the hoe is Paul 'Daffy' Dean, younger brother of Chicago Cubs' Jerome 'Dizzy' Dean, who is dreaming of short-cropped grass and a packed grandstand instead of tall corn and the wide-open spaces. Daffy -- like brother Dizzy -- suffered from a troublesome money arm and he thinks the work on his huge farm here will get it back in shape. Brother Dizzy is, from all appearances, back in shape and pitching and brother Paul, with a far away look in his eyes, yearns for the day when the old snap returns and he can toe the rubber once more."
﻿﻿
Probably not too long after the picture was taken, Paul began a comeback pitching for Dallas and Houston in the Texas League. In 29 games he pitched 201 innings with a 3.72 ERA and an 8-16 record.

In September, the Cardinals recalled him to St. Louis. In five games between Sept. 11-Oct. 2, he won three and lost one. His major league career, however, was effectively over and he was never able to regain the form that he showed with back-to-back 19-win season in his first two years.