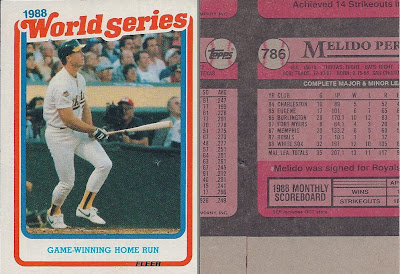 There's no easy way to effectively show it in a single picture, so you'll have to take my word for it that the images above are the front and back of the same card.
After close examination I cannot conclude other than this is a true hybrid between a 1989 Fleer World Series subset card and a 1989 Topps.
The 12-card Fleer World Series subset was a factory set-only insert, chronicling the 1988 Fall Classic between the Dodgers and the A's. The cards were not included in wax packs, etc.
It is only logical to assume that this mash-up resulted when at least one sheet of 1989 Topps backs was mistakenly fed into the press when the World Series highlights cards were being printed.
This would have had to occur at a contract printing facility that did work for both Topps and Fleer at about the same time. Whether or not somebody in the press room was screwing around to create the error is open to speculation. In theory, there should have been a minimum of 131 other examples of this type of Fleer/Topps hybrid printed . . . and that's if only one Topps sheet was involved. Whether any or all of them made it into factory sets is unknown.
This card's owner, George Sands of California, said a friend of his gave him the card about 20 years ago. The friend had purchased a number of 1989 Fleer factory sets, presumably to look for Billy Ripken variations. It is unknown whether the friend's set contained other examples of this error type.
Because this is a printing error, it doesn't qualify for inclusion in the Standard Catalog of Baseball Cards, but it is certainly worth sharing with you.
Posted by Bob Lemke at 11:08 AM