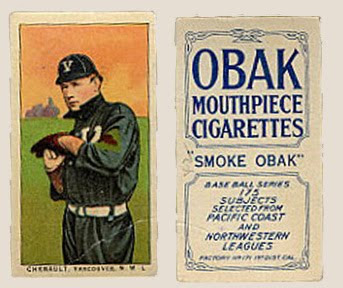 Jimmy Adams, Will Chenault
This pair of Vancouver Beavers were (probably) teammates for a short time in 1910, and each appeared on a single Obak card, Adams in 1911 (I never owned one, so no picture) and Chenault in 1910. While each had a five-year career in pro ball, neither ever tasted major league meal money.
Adams, a career outfielder, started his professional career at the highest level he would attain, the Class A Pacific Coast League in 1906 with Seattle and Los Angeles. Jimmy's ball-playing whereabouts for 1907-1908 are uncertain. There was an Adams (first name unrecorded) who played the outfield for Edmonton of the Western Canada League in 1907; that may have been our boy.
He was back in the PCL in 1909, with both Vernon and Sacramento. In 1910 he dropped down to the Class B Northwestern League with Seattle and Vancouver. In 1911 it looks like he opened the season with the Beavers then moved on to Brownsville in the Southwest Texas League. He was back in the NWL with Victoria in 1912, which looks like his final year in pro ball.
Will Chenault was a pitcher, like Adams, there is no record of when or where he was born or died, He also began playing in the minor leagues in 1906, in the Class D Kentucky-Illinois-Tennessee League, where he split the season between the Paducah Indians and the Vincennes Alices (!). The next year he started at Class B with Terre Haute of the Central League, then loved up another notch to A ball with Indianapolis of the American Association.
He dropped back down to the Class C Virginia League in 1908, pitching for three different teams in the circuit: Norfolk, Portsmouth and Richmond.
In 1909 Chenault took his glove to the West Coast, with Portland of the Northwestern League. In 1910, his last season of pro ball, he threw for both Vancouver and Seattle of the NWL.
Considering that so little is known biographically, at least in baseball historical circles, about these men, it's good they have been immortalized on their Obak cigarette cards.
Posted by Bob Lemke at 2:01 PM